What a night! Somehow I had forgotten how intense the energy of a playoff game is…I guess because it’s been a year (?)…but I was definitely reminded last night when I walked into Lehnhoff stadium for round one of the 6A Div II playoff game of Steele v the San Antonio Brandeis Broncos. Holy smokes, it’s an electric atmosphere and so much fun!

Regardless though, I knew this game was a big deal, as are all games from here on out (at least more so than usual), so when I got the chance to dress Rex up as a tiny Knitro (the Steele mascot), I obviously couldn’t pass it up! 1) Rex LOVES to dress up, 2) He’s adorable, and 3) It’s a great way to show our team spirit! So a little background…Because the Steele Knights are so awesome, my sweet neighbor (who lives in Smithson Valley country, mind you), wanted to be a Knight for Halloween a couple of years ago when he was in Pre-K I think. Coincidentally, we got the costume handed down to us on Thursday (it’s a few years too big for Rex, but as you’ll see, the child rocked it and made it work). It’s an awesome costume, but it had a red velvet cape, an embroidered red “V” on the chest, and a big embroidered red dragon on the chest as well. Although it was awesome, I felt like I could probably “Knight-i-fy” this costume pretty easily and make it even more awesome. So the next day (game day), the littles and I stopped at Hobby Lobby on our way home from swimming to pick up our supplies. I had already decided to cut up one of Scott’s Steele laptop bags  (sorry, babe!) to get the Steele “S” to cover up the dragon, and I only needed two more items. To my excitement, I found a sparkly silver ribbon to cover the V perfectly, and Landri picked out a pretty silver and black sparkly fabric for the new cape. Rex didn’t seem to care much at the time as he ran around like a wild child in Hobby Lobby. As it turned out, taking those three to Hobby Lobby was the hardest part of the project (which, by the way, was very hard, LOL). Anyhow, when we got home, I got them all to nap (by that I mean the boys) and went to work! It was a little challenging, but the short version of the story is that it worked 100 times better than I could have ever imagined! Rex was super pumped to be “Knitro Baby” as he called him. I also heard him refer to himself as “Knitro Man,” and “Knitro Boy,” but “Knitro Baby” seemed the most frequent, so that’s what we are going with. A few times Landri called him “Knitro Junior,” but he was not cool with that, LOL! Anyhow, he literally got thousands of smiles from everyone in the stands, on the field, players, support, etc and made the news at least once that I know of (there was a live streaming video from News 4 San Antonio with Hannah Trippett). After a week full of so much divisiveness and emotional turmoil in our country, it felt good to see the smiles. And, it was even a little funny – when I was walking through the stands with him, I almost felt like I was with a celebrity – everyone seemed so excited to see the tiny knight! Anyhow, super fun for all!

And so onto the game! Steele won 42-21! I really only saw the first half due to a random medical issue with Landri (she’s ok), but it was a good game from the parts I saw.  Next week we play Austin’s Vandegrift at San Marcos HS at 7:30. #knitrobaby is looking forward to cheering on the Knights again!  SK ALL DAY! 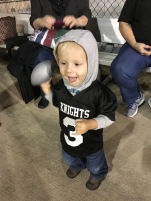 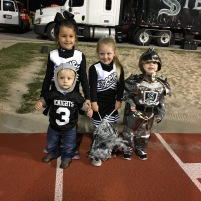 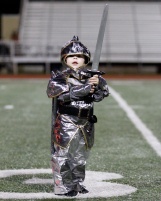 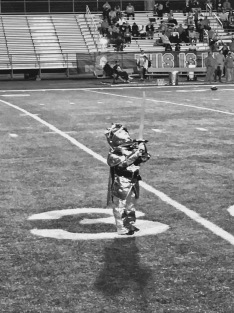 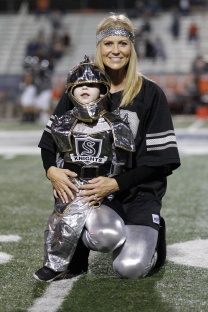 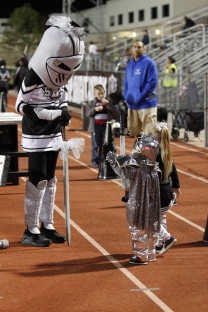 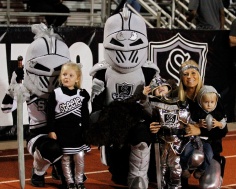 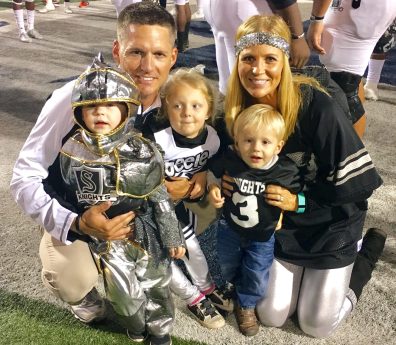 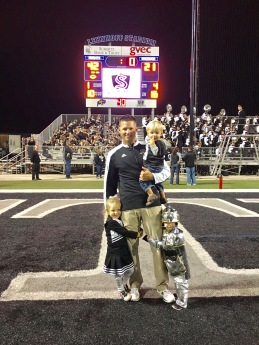