A couple new firsts to report this month… Landri enjoyed her first popsicle (she seemed to like it although I was hoping for a more favorable response than we got)… She also wet the bed for the first time as a result of her diaper removal skills which continues to be a legitimate concern these days.  I went to get her one morning and she was completely naked, sans diaper, as it was wadded up in a limp pile in the corner of her crib.  Her skin was cold and clammy and upon closer inspection, I realized that her sheets were drenched in pee pee as well as her bumper which had soaked it up like a sponge.  So nasty.  In addition to new abilities such as diaper extraction, Landri also has been perfecting her climbing technique.  The other night she climbed our entire flight of stairs by herself (of course we were spotting her though).  One last new first was that she learned to open the pocket door to our bathroom.  Sneaky little girl!  And as far as more traditional firsts go, Landri did get to go to Natural Bridge Caverns for the first time too!

Landri’s favorite foods hands down are still Mommy’s homemade bean burgers and fresh blueberries.  She literally eats at least one bean burger per day and probably a pint of blueberries every other day.  It’s unreal.  Hot dogs are new to Landri and she thinks they are okay – doesn’t love or hate them.  Teensy Fruits (baby fruit snacks) are her new favorite snack.  She shovels them into her mouth by the fistful.  It’s impressive.

There are some new things that Landri really enjoys doing.  She loves playing fetch, exploring new places and things by herself, deliberately stepping on my toes (I swear she does it on purpose), playing with my digital watch while I change her diapers, jumping on the bed (whether it’s hers or mine), and dancing/bouncing to music.  Additionally, she appears to enjoy showing people her belly button (see previous post for a video).  She’s also figured out how to wear necklaces and bracelets and gets creative about what she puts on.  Here, she found one of my bras and wore it around her neck!

Landri still has her same dislikes that she’s had all along, but there is a new one to add to the list that’s kind of interesting.  Landri does NOT like to sleep in our bed apparently.  The night of the huge rainstorm where we had over 11 inches in just a few hours in the middle of the night, Landri woke up crying, probably due to the loud thunder and all of the bright lightning.  We tried to put her in bed with us and she FREAKED out and HATED it.  Finally Scott put her back to bed in her crib and she passed out immediately.  She really is independent and not cuddly at all!

So what does Landri look like these days?  Her hair is getting longer, slowly but surely, and she sports pig tails 97% of the time so as to keep her bangs out of her eyes.  She also has 8 teeth (4 on top and 4 on bottom).  [Quick aside on the teeth: because she has so many teeth, I might have mentioned that I’ve been trying to brush them which is the baby equivalent to what a nuclear WWIII would look like.  However, slowly but surely, with a lot of cheering, Landri SOMETIMES plays along.  Last night she actually HAPPILY BRUSHED her teeth, top and bottom on her own.  We made a HUGE deal so hopefully she will try again another day.  We’ll see.]  Her legs are still thicky thick as Nelly would say, but they do seem to continue to slim down.  Her belly doesn’t seem to be getting smaller though and actually seems like it might be getting bigger.  I swear she gets cuter by the minute!  Oh and her feet still smell completely gross.

Landri’s Language!  She still doesn’t really say much, but she is starting to understand more.  You can ask her to get her bottle or phone and she will go find it and retrieve what you asked for.  She also seems to like doing it and claps for herself when she gets it right.  She definitely knows what “nanners” (bananas) are and where we keep them in the kitchen. She points and grunts for them at breakfast everyday.  She also understands “big step” if there’s a curb and “let’s hold hands,” and will stick out her little arm for you to grab her hand and help her tackle the big step. It’s really cute.  She totally knows wave, clap, and bounce too.  It’s just whether or not she feels like doing any of those things when you happen to ask her to (again, very independent).

The other day we took Landri to Guadalupe River State Park (she hadn’t been since she started walking) and she had a blast.  Here is a quick slide show of some of my favorite shots.  She loved the entire trip, especially when we went to the playground and let her go down the slide.  She would ask for more and get really mad until Scott took her again.  You’ll see a couple shots of her angry at the bottom of the slide wanting to go again.  Keep scrolling afterwards though so you don’t miss Scott’s latest blog contributions below.

Scott actually performed decently well on this month’s Scott Says segment (perhaps he felt the need to redeem himself after he spoke the truth for all men worldwide: https://livinwiththelehnhoffs.com/2013/10/24/a-look-inside-scott-lehnhoff/).  But before we get to this month’s interview, I do have two small DDA’s to report (Daddy Daycare Alerts).  One night we were out to eat at a Mexican place and Scott was feeding Landri beans.  I asked him to try them first to make sure they weren’t too hot.  I meant spicy and temperature hot, but I guess he thought I only meant temperature hot and completely neglected to monitor the spiciness of the beans.  It wasn’t until several bites of beans with Landri freaking out in a panic and me asking if he was CERTAIN they weren’t too spicy, that he took another bite and was like, “Oh gosh!!  They are way too spicy for her!  I thought you meant temperature hot!”  WELL HELLO DUH!!!  And then the other day we were at the park and Scott jumped off the swing and let it swing smack into her forehead basically knocking her over and giving her a huge red egg above her left eye.  Here’s her reaction captured on film in case you missed it in the slideshow above (and he’s laughing, LOL):

M: Now that she’s growing up, what are Landri’s top three skills?

M: What are some examples of things she understands now?

M: What’s the best thing that Landri does?

M: What makes her laugh?

S: Sliding on the slide.

M: What is your favorite thing to do with Landri?

S: Playing with her.

M: That’s a cliché answer.  Can you come up with something more creative?

M: What’s your favorite thing to do with Landri?

M: What is the cutest thing about Landri?

M: What does look like?  Can you describe it?

M: What are some funny things she does?

M: On a scale of 1 to 10, 10 being through the roof excited, how do you feel about the upcoming birth of your next baby?

M: OK, how many weeks pregnant are we?

M:  Wow, I can’t believe you know that! Impressive!  Do you think it’s a boy or girl?

M: You’ve done decently well this interview.  Any final words of wisdom for our readers?  You know, about remotes, phones, food and roaming or anything?

S: The rules still apply.  All those things make a baby very happy.  Especially this baby!

Lastly, here are some additional photos of Landri over the last month.  She’s growing up so fast! 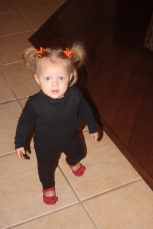 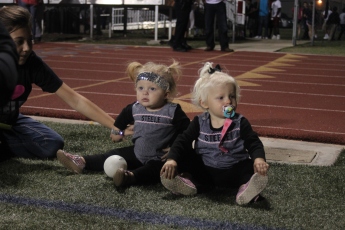 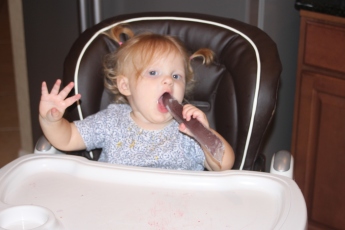 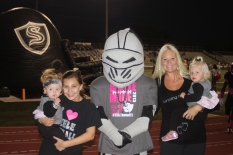 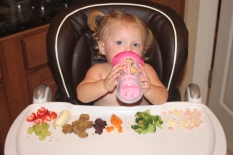 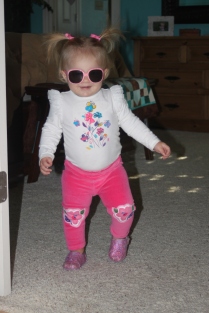 PS.  I’m running the SA Half Marathon this Sunday with my friend Tara from Arizona… and then we are finding out if baby #2 is a BOY or GIRL!!!  Stay tuned… the next few blog posts should be good ones!  🙂