Three little Lehnhoff’s, hangin’ at the pool…
floatin’ in their clothes and lookin’ pretty cool!

I’ve said this before.  As a former swimmer, water polo player, swim coach and instructor, water park and pool lifeguard, and water lover whether it be a pool, river, lake, pond, or ocean, water safety is something that I take very, very seriously.  During the course of my life, I’ve known several people to drown, one of whom was a (swim) teammate of mine at Trinity University my freshman year.  In fact, just this week, someone I know told me that a child in her 2 year old daughter’s daycare class drowned here in San Antonio at an apartment pool.  It can happen to anyone, anytime, anywhere, and the water is something to always be respected.  While it is impossible to “drown-proof” a child, there are precautions we can take to protect our kids around water.  Many parents consider survival swim lessons to be too extreme and worry that this type of lesson will “scar” their kids, making them hate the water, but I beg to differ.  My kids cry during lessons (well, not Landri anymore) but it’s because they aren’t in control.  They are happy to stay and play in the water, if they are getting to play on their terms.  They just want to do what they want to do.  It’s like that in all areas of their life and so of course the pool is no exception.

Landri has taken this style of lesson three times now over her short life, and I am so thrilled to report that at age 3.5 years, she is more or less a fully functional swimmer with no floatation devices needed!  She can even jump in and swim across a small pool (see video example here of her doing it while wearing onesie PJ’s to mimic having fallen in while clothed).  If she runs out of air or gets tired, she knows how to roll over onto her back and float until she’s rested enough to roll back onto her tummy and continue swimming.  This year was Rex’s second time taking lessons, and his first time to learn the roll-float-roll-float-etc sequence since he was only 14 months last year and only floated.  He did great as well, although today he wasn’t cooperating as much on the roll/swim part for the video, so I’ll just include a clip of him floating.  He’s also wearing onesie PJ’s.  And lastly, Ty Baby joined the ISR club at 9 months and can also successfully float even while clothed!  Please note too, that with the boys, although you hear them screaming bloody murder, this is a GOOD THING!  When a child falls into a pool, we want them to alert their situation by screaming as loudly as possible!  Also, don’t worry, not all of the lessons are fully clothed as shown in my photos below.  The children gently work up to that on the last couple of days (including wearing full regular diapers which become extremely heavy when soaked).  As I mentioned earlier, this is intended to mimic a real life accidental scenario.  And then at the end of 5 weeks, the kids all got a trophy too which was pretty cute.  Now the pressure is on me to take them swimming regularly to maintain their skill.  Wish me luck at the pool with all 3 alone!  I have to admit, I’m a little scared since they are already a handful on dry land!

PS.  Yes, the lessons were outside and yes the pool was heated.  Most days were fine, but some were pretty cold – like today (hence the snow suit on Ty in the trophy photo above)!

Please feel free to contact me if you ever have any questions about this style of lessons or read more about ISR online! 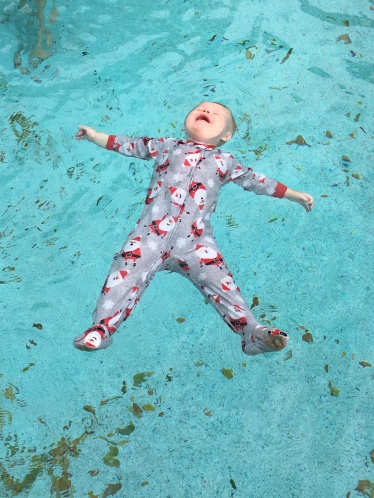 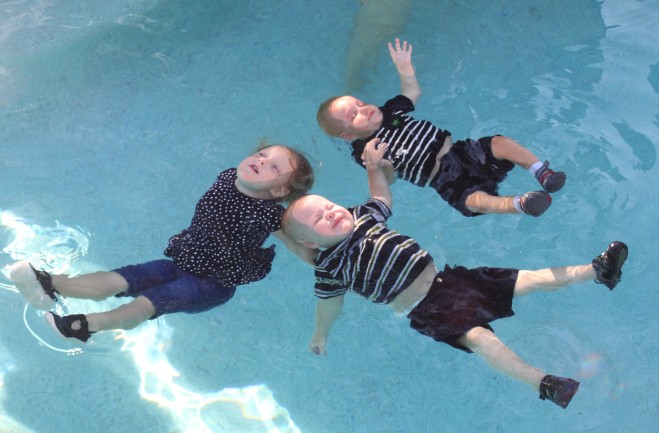 Here was Rex’s float post last year (that also links to old Landri ones too, where she was slightly younger than Rex is now).