We had another awesome night of Knight football this evening! Final score, Knights defeat the Wagner Thunderbirds, 55-0.  Sadly I was only able to watch about 3% of the game – if that – with all these kids!  And that’s with tons of help!  I think I’m aging rapidly, because each game gets harder and harder and more and more exhausting.  First of all, despite eating dinner, the “big” kids insist on eating “snacks” from the moment we step foot into the stadium until the bitter end.  They literally stuff their faces with junk food for like, a solid 3 hours.  It’s usually crap such as ring pops etc so that explains why Rex is like a giant ball of duct tape to the touch.  Also, neither of them hold still, for even one second.  Maybe it’s their ages, maybe it’s the 10,000 grams of sugar they ingest during any given game.  Or maybe it’s both.  It’s just a constant stream of climb, hang, lean, fall, climb, hang lean, fall, over and over on the bleachers and on your person.  Throw in a few whiney tantrums about wanting a fifth ring pop and baby who just wants to take a nap, and it’s a little bit of a nightmare.  Then there’s the car ride home where Landri tantrums about stupid stuff the entire ride, never falling asleep, and then proceeds to tantrum for another hour at home because she is a WAAAAAAY over tired threenager.  I’m really starting to question how I am going to make it through the season.  Like, for real.  I really want to start getting a babysitter to leave 1, 2, or maybe even all 3 at home, but I know how much they LOVE going to the games and I want them to be a part of it.  But… the thought of doing this a bunch more weeks in a row makes me really freak out, especially when I consider that it’s going to be colder and I’m going to have to bundle everybody up too.  Ugh.  Perhaps in reality it’s not as bad as it feels…but after spending all week alone with them, I’m pretty worn out by the time Friday rolls around and my patience is quite thin.

Help!  How do I survive? Do I pack them all kinds of crap to entertain them (coloring books, stickers, etc)? I really don’t want to because I feel like I’m already carrying enough supplies to survive a week in the woods with them and my backpack is heavy enough!  Do I leave them at home?  Do I buy them their own iPads?  Or do I just starting drinking at noon on game days (JUST KIDDING, LOL)?

I know they may look cute, but don’t let that fool you.  They don’t always act cute, haha!  😉 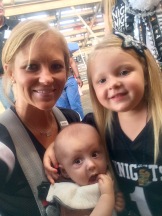 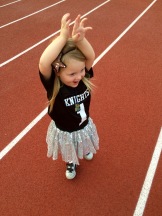 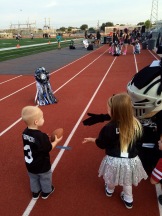 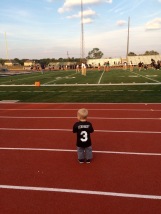 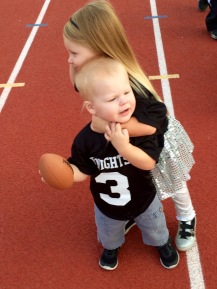 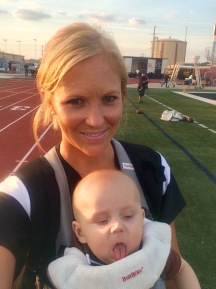 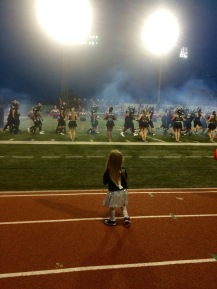 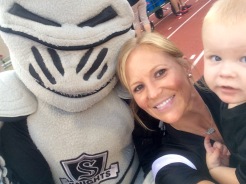