Before I forget, here’s a look back, just a short 18 months ago, at Landri at 18 months.  And now Baby Rex is 18 months and he is definitely growing out of the “Baby” part of his moniker! He sure is a handful, but he’s a sweetheart too!

Like his father, Rex is a pretty simple little dude. I don’t mean that in a negative way at all, but rather the opposite. For the most part, both of them are extremely easy going and low maintenance. And I can imagine that Scott as a toddler was very similar to Rex and probably shared many of the same likes and dislikes. Rex loves to get into everything and anything, especially things that are off limits to toddlers. He loves to climb everything and anything that he can, and usually almost stops my heart in fear at least a few times a day from some crazy risky and dangerous move that he’s trying to pull off. He happily plays with trucks and tractors every day and still loves balls of all kinds. Really the only things that he dislikes are probably most vegetables (although he is getting better and has several fruits he will finally eat now) and being restrained of course.

Rex’s language continues to grow. He adds new words to his vocabulary every day and can repeat almost anything (when he’s in the mood and wants to). He also said his first sentence, “Let it go,” thanks to his sister’s obsession with the movie Frozen, LOL! As you may recall, Landri’s first sentence was “Daddy go,” when Scott went to work one morning. Anyhow, he says “please” and “thank you” almost all of the time now and says “love you” a lot too, which literally will melt your heart!

Rex is growing big – he seems much taller to me here lately. We will find out where he falls on the chart soon as he has his 18 month checkup the same day as Landri’s 3 year and Ty’s 4 month (someone may need to deliver me a bucket of margaritas after that doctor’s appointment, haha!). Rex has all of his teeth now, still maintains a nice little pot belly, and is rockin’ calico hair. He runs fast, he’s desperately still trying to catch some real air when he “jumps,” and he is learning all of his body parts (nose, ears, eyes, etc).

Here are a couple random fun facts about Rex at 18 months:

M: What is Rex’s best skill at one and a half years old?
S: Probably climbing on things.

M: What do you find most annoying about Rex at this age?
S: He climbs on everything.

M: What is the funniest thing he does now?
S: Um. I don’t know. There’s a lot of funny things.
M: Like what?
S: Like pulling Landri’s hair!

M: What is the biggest difference between raising girls and boys so far?
S: I don’t know.
M: You can come up with one thing, come on.
S: Um…Girls are a lot more…Landri needs a lot more attention than Rex. Girls are more needy.
M: Probably, but it’s also partly their ages. Landri can converse with you. Rex can’t.

M: What to looking forward to the most with Rex?
S: Doing boy stuff.
M: Define ‘boy stuff.”
S: Playing catch. Hunting. Watching football. All of which no one will do in this house with me. 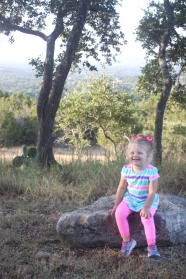 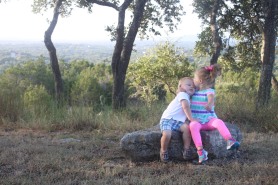 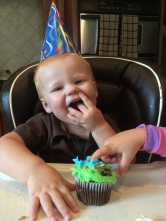 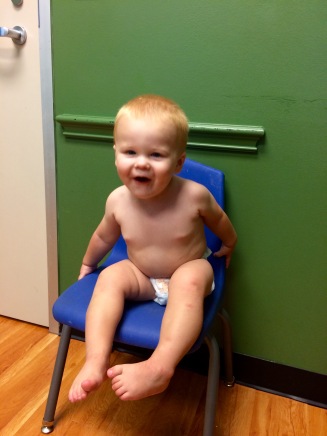