Welp, I pretty much feel like a disaster most of the time these days, and I’m not sure I’ll ever not be, at least not for the next few dozen years!  I just feel like something is “off” for me and I really think it’s that I haven’t been doing yoga or meditating.  I have two more weeks of no exercise, so at least I will be able to start running and doing yoga again soon, and I signed up to do Oprah’s and Deepak’s 21 day meditation (link). So maybe I can center myself a little, or at least start heading that direction.  PS.  If you’re interested, it’s free – check it out!

So what’s new with Rex? 16 months!  For some reason I have about a million pics of him this month and it might be because he’s just so darn adorable!  I can’t believe how grown up he is and how humungous he seems compared to Ty Baby!

Rex is definitely saying more words and even telling us “poo poo” and grabbing his diaper when he goes #2 (not always but maybe half the time).  He also stands at the fridge screaming for his “baba” (sippy cup).  But probably the coolest thing he says is that he chants, “Baby Rex! Baby Rex! Baby Rex!” over and over!  However he can’t make the “x” sound, so it comes out sounding like “Baby Ray” haha!  He’s also started saying “no” and “mine,” both of which are very important when Landri is your big sister!

But speaking of the word “no,” he does not handle being told “no” by his parents! I’m seeing glimpses of mini tantrums from him which is terrifying; just the thought of having TWO kids that tantrum…but, I guess that’s all part of what it means to be Toddzilla! And so also along the same lines, Rex now goes to Time Out when he’s not listening. His biggest offense (probably 97% of all of his offenses) is standing up on the couch. He tries to climb over the top which is terrifying (4 foot drop to the tile floor on the backside of the couch). The other 3% of his Time Outs is for throwing food (most of the time I just end the meal because he’s done eating and bored when he throws it rather than send him to Time Out, so don’t think he doesn’t throw food anymore – he totally still does).

And speaking of throwing things, Rex still loves throwing things in the trash. This can be very helpful when it’s actual trash (it occupies him and keeps him from doing things like climbing over the top of the couch), but it also can be quite annoying (he has thrown away Ty’s bottles and the TV remote!).  So if anything important is missing, ALWAYS check the trash can!

And speaking of Rex’s skills, besides throwing things well (and yes, he’s still a very serious baller), Rex has been cultivating some other skills.  First of all, Rex loves dancing! He is so cute too when he does it.  I need to work on getting some more video!  He also can blow mouth bubbles (it’s disgusting) but also blows kisses (it’s adorable).  He also can now fully remove his diaper, so keeping him in pants/shorts or a onesie are a must!  Additionally, he can go down stairs now. He sits on his bottom and turns around, sliding down backwards in his tummy. He’s still a little unsteady (I wouldn’t let him do it without a spotter), but I do feel a little better that he at least knows the safe way to descend on the stairs.  And lastly, Rex also rides a tricycle now!  And it’s terrifying.  Remember that hill he encountered on our driveway in a run-away stroller? We’re finding out that it’s scary for bikes too!

There are a few things besides playing ball that Rex loves.  He is really into brushing his own teeth; it’s pretty cute and he usually sits down to brush.  And he loves putting on shoes. If I need him to hold still (which is basically impossible otherwise), I just sit him down with a pair of shoes. He seriously loves shoes. His shoes, Landri’s shoes, my shoes, Scott’s shoes. Shoes!  Shoes!  Shoes!  The boy loves shoes!!! And of course he also still infatuated all phones and remotes (even if he does throw them in the trash)!

Rex is also still all boy. He is just always grubby and dirty. My favorite was the other day when in the car Landri sniffs the air and says, “Something smells gross.”  Then after a pause she goes on to exclaim, “Rex smells gross!!!”  I about died!  She’s never said anything more accurate in her life!!  You see, Rex has an uncontrollable drooling problem and I finally figured out that his drool soaked shirts are what have an unpleasant scent to say the least! They literally will be soaked down to the belly button and thick strings of drool constantly hang out of his mouth! He slimes everything he comes in contact with!

Something unfortunate happened to Rex recently.  I may have mentioned that he doesn’t EVER hold still unless he’s restrained in a carseat, high chair or stroller (or putting on shoes).  Well, he’s always going a million miles an hour and the other day, apparently that included when Scott was using the restroom. According to Scott, Rex snuck up so fast and ran right in front of him and unfortunately Scott peed on Rex’s head!!!  Like I said, he’s gross.  LOL!  Sometimes, he gets random impromptu baths in the sink during the day.  This would be one example.

Also, just a quick note, Rex is super pathetic when he is sick just like his dad is. But I will say that there’s one thing worse than a sick toddler, and that’s a sick husband!  Both of which we had this past week!

Scott Says…
M: What’s new with Rex these days?
S: Not much. He’s been sick.

M: What is the funniest thing Rex does?
S: Walks with his stomach out.
M: I think the way he rides his tricycle is pretty funny.
S: Yeah he rides it like he walks.

M: What is Rex’s personality?
S: I don’t know. He’s got a good personality but I don’t know what it is, how to describe him.
M: I think once you said, “He’s his own man.” I feel like wild and free describes him.

M: What’s the best part of having three kids under the age of three?
S: There’s not really a best part of that. It’s definitely not how it should be drawn up.
M: Why is that?
S: Because none of them can take care of themselves! They all wear diapers!
M: So that’s the worst part?
S: And it’s chaos every second of every day!
M: So are you glad that your summer vacation is over and you’re back at work?
S: Yeah I am.
M: How old do you think Ty will be when you watch all three of them by yourself for the first time?
S: Four? Five? 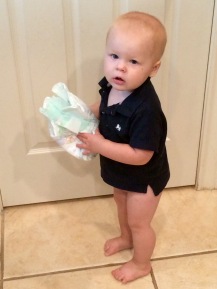 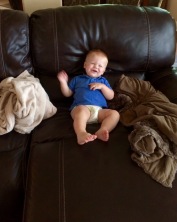 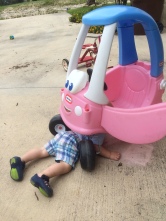 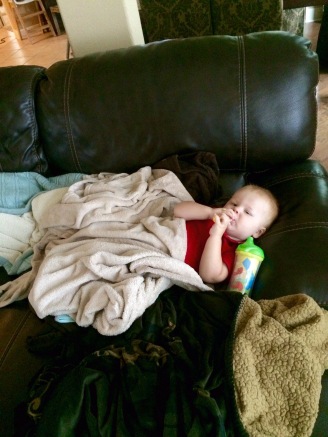 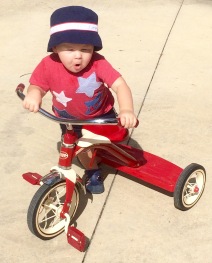 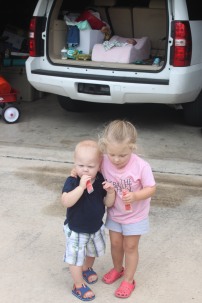 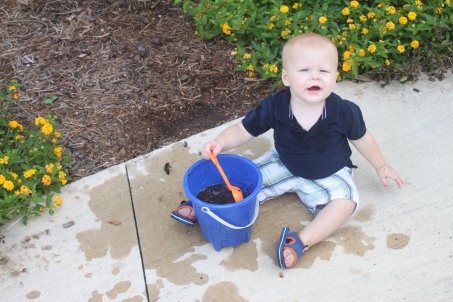