Today Landri is 19 months old and in the last month has had a few new firsts! On the big girl “beauty” front, Landri sported her first real pony tail (it’s still a tiny bit too short on the sides, but looked adorable nonetheless)

and she also sat still long enough for me to paint her toenails. I selected a super light pink color in case she wasn’t going to hold still very well (didn’t want blood red polish all over my beige carpet before it dried), and so I’m not sure she really noticed it. I really want to try a darker, bolder color but am too chicken. Or maybe I just know Landri Lehnhoff too well. Landri also attended her first high school soccer game and loved it! She now says “soccer” and can pick the soccer ball out of a ball lineup. She also went to a bar (sadly not her first time, haha) and played darts for the first time (well, she attempted to at least)!

Kinda scary!! Another new adventure this month was getting her first brain freeze from drinking her fruit smoothie too fast. It was really funny because she kept sucking it down like a vacuum, but pausing to cry and then kept sucking and then crying, etc – I guess it just tasted too good to slow down or really stop (kinda like my first frozen margarita post-Rex)! And lastly, Landri sat on the real adult potty for the first time. Nothing came out, but we tried (she had told me “toot-toot” which usually means she has either dropped a load or is about to). I might buy her a little potty though and start letting her try it out so perhaps an update on that next month!

So… onto more fun stuff! Landri’s bad habits! She still has the ones I’ve written about before (tantrums, a passion for eating dog food, etc), but there are two new ones to add to the list. Landri has recently started pulling my pants down!!! Thank goodness I’ve always been at home when she’s done it, but I really have to think twice now about how loose fitting my shorts are! But probably worse is her new bad habit of sticking her hands down her pants when she has a poopy diaper (see post: https://livinwiththelehnhoffs.com/2014/04/04/a-day-in-the-life/). It’s happened a few times and is really horrible. I try to put her in onesies as much as possible right now until we get past this stage. I’m hoping she does it because she doesn’t like poop in her pants (another positive sign for potty training, right?), but who knows!!!

So when she does end up with a poopy mess on her hands (literally), she starts repeating the word, “mess” incessantly. And anytime she sees a mess, she points it out and wants to clean it (wipes floor, etc). It’s definitely her new favorite word to use. Here’s a small clip of her working on the kitchen floor (of course she asserts her independence as soon as I start filming her and refuses to clean though): http://youtu.be/xEjuLE_xPFs. Other new words include please and thank you, and if you tell her to “buckle up for…,” she shouts back “safety!” She also asks for cheerios at every meal now (she’s working on her spoon skills still). But probably my favorite is that she says, “love you” randomly and at bedtime. It melts my heart.

Other odd tidbits: Landri continues to be a complete FREAK when it comes to what she puts in her mouth (and no, this isn’t a self-deprecating vegan comment, LOL).   For example, this morning she ate an entire orange, the peel and all, just like an apple without a core… Yesterday she repeatedly cried until I gave her raw white onions to snack on…I also caught her eating flowers this morning… And a few weeks ago while taking a bath, she licked a bar of soap and didn’t skip a beat! WTH?! She also has a fascination with wiping herself over her clothes (as if she’s cleaning up herself after a diaper change). I am hoping this is yet another positive sign and leads to easy potty training! One last odd tidbit… Landri really likes the one shoulder look as far as her attire goes. Lately she slips out of one arm of her clothes all the time and if you fix it, she will slip one arm right back out again! So funny! It’s always her right arm!

As far as her passions go, Landri enjoys being busy. In fact, “busy” is the adjective that I hear used most often to describe her. This past month she’s finally started to really get into doing puzzles, playing tea party more than ever, talking on the phone (http://youtu.be/3atboTe_75w), and playing with her baby dolls (she feeds them food, bottles, pushes them in the swing and swaddles them in a blanket). And a new hobby is cleaning! Landri can spend forever playing with a dust pan and brush! I also got her a little pretend car that she loves to drive around (or be pushed in). As far as sports go, Landri still likes Scott to lift her up for basketball dunks (http://youtu.be/GSdnEraMEMw), and she most recently tried her hand at T-ball (play close attention in the first few seconds, it’s a quick hit): http://youtu.be/P58xM_-B_2o. Landri also loves all animals. She’s learning to identify animals and what sounds they make. Recently we went camping with friends and she got to see some cows: http://youtu.be/GK4vYr1GsNA.

Yeah, did you catch that? Camping. With Todd-zilla and a 4 week old baby! Not to mention two 5 year old boys and Landri’s little B – Fri, Cami. Are we insane?!  Dummbest question ever!  And, yes, we are. I think it will take me three days to recover, and it’s not from too much booze! Talk about serious chaos! Surprisingly, Rex was the most behaved of all, LOL! Here are some pics of Landri and Cami having a blast!!! While it was super wild, it was also super fun!

With age comes improved skills, and Landri not only can walk and run, but also march! It’s adorable – high knees, kind of stomping on the ground with each step almost. She also is really good at spinning, so much so that she makes herself super dizzy and falls down. Hilarious! Most recently she conquered rolling across the floor (she thinks it’s really funny too).   And as I mentioned earlier, she is improving her spoon skills to eat cheerios more effectively. Out of all of Landri’s skills however, I would say her teeth brushing skills are by far the most improved. We still have a long way to go, but at least it’s not the end of the world every time we brush anymore!

To kick off your favorite section of the Blog, Scott Says, here is one of my favorite quotes from him this month describing Landri, “She’s like a cockroach and gets into everything.” Icky but true!

M: Tell me three words to describe her.

M: You follow directions well. What is Landri’s best skill?

S: She says a lot of words now.

M: Does she say anything funny?

M: It is funny how she pronounces it. What is the worst part about Landri right now?

S: She gets into everything. And she hits her brother.

M: Why does she do that?

M: What is your favorite thing about her?

M: She does, she loves sports. I think she’s a mini-you. Do you?

M: Does it make you sad to see how fast she is growing up?

M: What age has been your favorite so far? 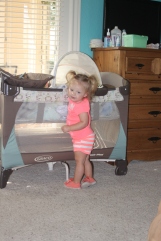 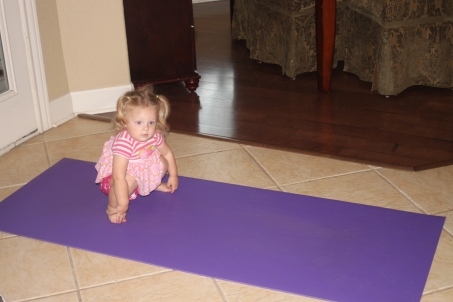 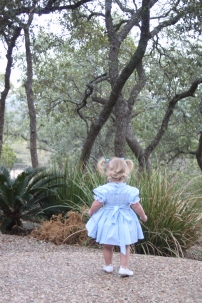