As usual, there is a lot to report this month!  In the past couple of weeks, Scott and I celebrated our 8th wedding anniversary, the 3rd anniversary of my father’s passing, and I’ve run 3 half marathon +’s (numbers 2 and 3 were actually 14 and 15 miles respectively) in my neighborhood as preparation for the real thing in about 5 weeks.  That said, pregnancy is going pretty well and as of today, it is officially HALF WAY OVER!!!  So the countdown to meeting Baby #2 has begun (oh, as well as the countdown to wine thirty!).  I also found some great maternity workout pants at Ingrid & Isabel for those of you who might be interested (http://www.ingridandisabel.com/category/ingrid-isabel-catalog/active).  And I apologize that I didn’t get the chance to update you that Scott’s team won two weeks ago at San Marcos, were off last week and then also won again tonight at home against Corpus Christi King.  Check out a few of the latest pics at the bottom of this post.  Just like her photo shoot with Glycerin, the girl knight mascot a few weeks ago, Landri had a similar photo shoot with Knitro, the boy knight (she completely panicked and totally freaked).  A visit with Santa still isn’t looking too good this year.

And of course, there’s lots going on with little Landri.  Here are the latest new firsts that come to mind from last month:  Landri saw and petted a horse (we told her it was a big puppy!).  She really liked it!  Also, she got to play in a splash-pad type kid water fountain in Houston when visiting her Grammy.  She also really liked that. Pics included below.  Unfortunately, we had two “bad” firsts as well.  Landri had her first incident with a rubber band.  I was driving and heard a little snap followed quickly by five minutes of horrific screaming.  I assumed she had attempted to pull out her pigtail and gotten snapped by the band, and sure enough, upon arriving at our destination, I found a one pigtailed little monkey with tears streaming down her cheeks in the back seat!  She also had her first trip to the Urgent Care clinic after she slipped on our wet tile floor and smashed her front teeth into her top lip and bled uncontrollably (everything was fine though luckily)!

As far as new skills go, we are gaining all kinds of talents.  Some good, and some not so good.  First of all, I’m very upset to report that Landri has learned to take off her diaper.  It has happened about three times, once with poop which I thankfully caught before she created an epic disaster, but yesterday she got it off and pee peed on the kitchen floor before I could stop her!  I think the lesson learned is that Mommy actually needs to dress Landri in clothes (covering up her diaper) and not let her run around almost naked anymore!

Another not so good skill is nose picking.  As you can see in the photo, Landri showcases this new skill for everyone at HEB while holding her purple poodle.  On the less disturbing side, Landri now actually tries to use the TV remote by pointing it at TV and pushing the buttons just like we do.  She also learned how to push the home button on iPhone, making the screen light up; she likes playing “Peekaboo Barn,” a baby app on the iPad; she claps at appropriate times during football games (ie when she sees other people clapping and/or cheering); she’s learning sign language for “more,” and “all done” and LOVES watching us do it too; she finally drinks milk out of her sippy cup (no more bottles!), but still can’t set it down nicely – instead she violently throws her cup to the floor when finished; and she is starting to learn how to dance to music!   She doesn’t run yet, but is starting to walk faster.  She has also perfected her balancing yogi squat (there’s a picture somewhere down at the bottom of this post).

Oh and one more thing – she’s starting to WANT to learn to climb.  She really can’t yet, but she wants to pretty badly.  See dishwasher climbing here:

Landri also has a few new things that she really likes doing.  At the gym, she LOVES watching the guys playing basketball. She can stand at the glass door to the court FOREVER watching them play.  I have to literally DRAG her away, she loves ballers so much!  She also really enjoys getting into her dirty diaper pail (note to future parents: don’t buy the Arm & Hammer Diaper Pail because babies can easily open it as I’ve learned the hard way).  Another thing she likes is the band at half time during football games, although we don’t watch them very often because we usually go play during half time.  She also really likes stickers, especially the big round ones from HEB.  Landri also seems to get more obsessed with her paci each day that passes.  She prefers to have one in her mouth and one in each hand.  Then she spits out the one in her mouth, shoves one from her hand into her mouth and picks up the one she spit out, rotating them.  She does this over and over.  She still really likes our puppy Smoke, and her stuffed purple poodle.  And unfortunately, she really likes her new nose picking skill.

And of course, while there are things she likes, there are also things she very much dislikes.  So, since she is getting older, we started “brushing her teeth.”  I put that in quotes not because she doesn’t have many teeth, because she actually does (6 with 2 on the way), but because we don’t really BRUSH them.  Basically we just have a little plastic thimble-like device that goes over your finger with a few little soft bristles on it.  We put special baby fruit flavored toothpaste on it and ATTEMPT to “brush” her teeth. She hates it.  A lot.  Even though she likes the taste of the toothpaste.  She also really hates the sushi guy at HEB.  And when I say “the sushi guy at HEB,” I mean, ANY sushi guy at HEB.  She hates them all.  They TERRIFY her for some reason and cause huge meltdowns.  Thus, I try to avoid them.  And of course she still hates the usual things: being told no, being restrained, getting her face/nose wiped.

What does Landri look like these days?  Well, ladies and gentlemen, her neck has finally emerged from hiding!  It’s so weird to see – and with skin as white as snow too as it’s never seen the light of day before.  I still think she’s a little chunker, especially compared to some of her peers, but then when I look back at baby pictures of her, I think she looks skinny now.  Okay, I exaggerate.  “Skinny” would never be an adjective used to describe Landri, but seriously, she is thinning out for sure and losing mass to her previously giant leg rolls.

Some of Landri’s latest new favorite foods are: ice, blueberries, string cheese, and peanut butter (she will eat literally anything if it has peanut butter on it).

Landri’s latest new words that she can understand are “Bee-Bow” for belly button (and she can show you where hers is) and “nose” which she can also show you.  She still doesn’t say anything new from last month.

Just a couple odd tidbits that don’t really seem to fit anywhere else…Landri has VERY smelly feet (in a bad way).  Scott likens the smell to that of adult man (sweaty) feet.  She also has very bad morning breath which was part of our reasoning for starting her tooth brushing routine.  Landri also graduated to a new big girl rear facing carseat. There are pros and cons but all in all I think I miss her infant carrier because now I have to wake her up to get her in and out of the car if she’s fallen asleep.  And lastly, totally just my opinion, but all of those people who told me “be careful what you wish for” when it comes to walking, I call complete BS.  I think walking is so awesome.  It has made my life a BILLION times easier and I LOVE that she can walk.  I am being completely serious and do not understand the people who cautioned me so heavily about encouraging her to walk.  It’s the weirdest thing I have ever heard in my life.  Seriously.  Walking is by far her best and most useful/convenient skill.

This last month I attempted another B-Fri photo shoot with Landri and her bestie.  We dressed them in their matching outfits I made them, but getting good pics was almost impossible.  They adore each other and are seriously two cute little girls.  Here are the best ones:

Scott Says….So before I get into everyone’s favorite part of the blog, here are a few quotes from Scott that I happened to enjoy and jot down during the month:

“It’s like leading a lamb to slaughter.” (taking Landri to her one year appointment for 4 shots)

“She’s like, so persistent.  She has my chapstick and won’t give it back!”

…and probably my all-time favorite Scott quote since becoming a dad (I don’t know why I think this is so funny, but I seriously laugh out loud everytime I read it… I think because he was dead serious when he said it and was completely grossed out by some old, cold, poopy diapers): “The only thing worse than a warm $hit is a cold $hit.”  (taking out what we call the “Poop Snake” which is the long skinny bag of dirty diapers from the diaper pail)

Onto the 13 month interview…

M: Pop quiz.  How far along are we in our pregnancy?

S: I don’t know how many weeks.

M: What are you most looking forward to about baby #2?

S: Finding out if it’s a boy or girl.

M: No it’s not.  What is your favorite thing about Landri these days?

M: Can you describe them?

M: I actually videoed this at the football game, but sadly the video won’t work.  That is a good way to describe her moves though.  What impresses you most about Landri?

S:  How she can walk an entire football game.

M: What is Landri’s BEST skill?

M: What is most annoying about Landri?

S: When she pitches a fit for no reason and whines.

M: What is scary about being a parent?

S: Knowing you have two lives your responsible for.  Duh!

M: Please?  Can’t you come up with something profound for our readers’ enjoyment?

M: Can’t you come up with something profound for our readers’ enjoyment?

S: Uhhhh.. final thoughts on what?

Wow, as usual, it’s like pulling teeth.  Feel free to submit questions that I should ask Scott in next month’s “Scott Says!” 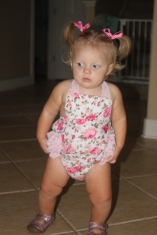 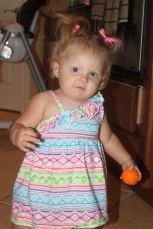 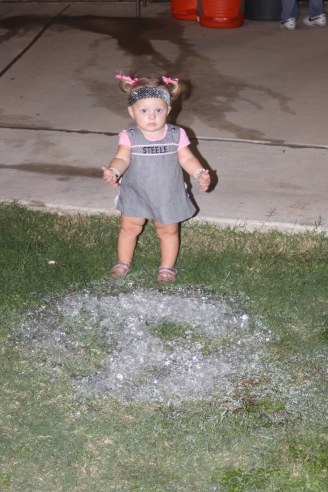 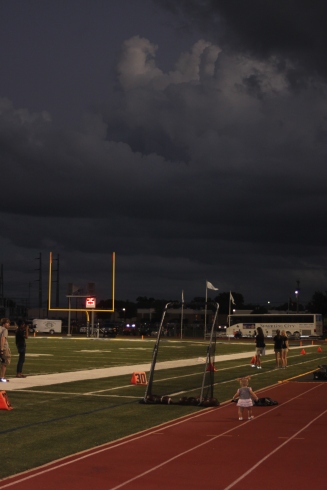 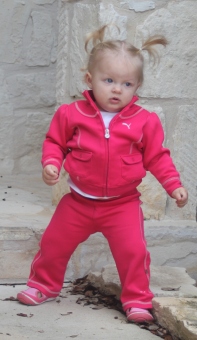 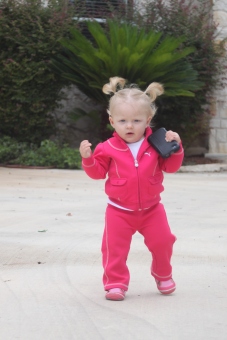