Tomorrow Rex is 13 months which means we are getting very close to baby #3’s arrival – less than 2 months hopefully! Rex generally remains a very jolly, happy little feller most of the time. We are so blessed!  Just for fun, here’s Landri’s 13 month blog – time flies!

Let’s start with what he looks like these days. He usually ranks in the 75-85th percentiles among his peers in height, weight and head size. He’s got a cute little Buddha belly still, and nice wrist rolls. His thigh rolls aren’t as pronounced as Landri’s were at this age, but he does have some nice, dimply, thunder thighs on him. He’s starting to show that he does in fact have a neck as he slims down slightly from his latest new cardio activity (which is a toddler “run,” where he leads with his belly button if you can visualize that; it’s quite entertaining to see). His fingernails are almost always long, sharp talons, as I can only manage to pin him down to cut his nails about once a month (he HATES being restrained). I’ve decided that Rex is a calico – his hair is definitely orange in some spots, blonde in others, and there’s even one patch that is actually white (platinum). Scott gave him his second hair cut this month – a buzz cut – and it looks really cute on him. He has two bottom baby molars coming in and another bottom tooth as well, bringing his teeth total to 9. This is helping him start to perfect his chewing skills. I caught him chewing on my wooden kitchen stools this morning (yes, exactly like a puppy), so I’m guessing that’s teething. His crib also looks like a beaver lives in it.

So onto what this little dude likes to eat… Totally unlike Landri was and is, Rex does NOT like raw fruit – at all. He is finally getting to where he may eat a few bites of banana, but that’s it. He does, however, generally really enjoy my daily superfood smoothies that I make from this awesome cookbook that my dear friend Maria gave me for Christmas. On the days that I share with him, he will pound an entire smoothie in a matter of minutes. And in order to balance out loving his mother’s delicious vegan smoothies, Rex takes after his father with his intense love of all meat, all ways. He also isn’t very picky when it comes to food. For example, when he found a small piece of pizza on the floor under the table from last night’s dinner that somehow didn’t get swept up, he happily gobbled it down before I could stop him. Gross. Which goes along with the theme of what little boys are 99% of the time. And that is very, very gross. LOL!

Rex is always covered in food head to toe. He rubs his dirty hands all over his face and hair on purpose, making himself filthy at every meal. He always tries to eat rocks/leaves/etc, getting dirty mud all over his face which then drools down his belly. He’s always got dirt and mysterious nastiness under those talon fingernails of his. He falls down a lot and it always seems to be in puddles and mud. If there is grossness anywhere, he is attracted to it like a magnet. Baths are a necessity for this boy and I’ve started stripping him after dinner and washing him in the kitchen sink almost nightly, not to mention his baby wipe baths several times throughout the course of each day.

Rex’s language skills are still slowly developing. He understands very small directions (although the word “no” does NOT appear to be in his vocabulary at all), mostly that involve putting things in baskets/hoops/boxes/containers/etc. He loves to say “Buh-bye!” when leaving, and likes to cheer for himself, “Yay!!!” while clapping. He knows his milk sippy cup is his “Baba,” but calls most things, “Mama” including the dog (still his favorite living creature on earth). He loves to growl and roar and will copy certain words/sounds that we make. But most of the time he just babbles nonsensically, nonstop. It’s really cute!

So I mentioned that he is good at putting things in boxes etc. This isn’t new, as I’ve blogged about it before, and it comes from his love of basketball, which is still probably one of his favorite activities. He is also really good at it, as well as cleaning up (putting toys away) and throwing things in the trash (whether you want him to or not). Several times a day I need to check the trashcans in whatever room we are in, as there are likely to be a handful of toys/books/etc that he has thrown away.

Rex has two major developmental opportunities that he needs to work on. The first is definitely listening. He doesn’t really listen at all. He loves to ignore directions. It’s like he just thinks they don’t apply to him! Second, he has developed a very bad habit of throwing food. It’s seriously his FAVORITE thing to do and makes a GINORMOUS mess. And since meat seems to be his chosen food, it seems like the floor is always littered with half chewed chunks of meat everywhere. It’s a vegan’s worst nightmare, LOL! As far as his dislikes go, I mentioned earlier that he doesn’t like to be restrained, and that definitely still holds true. This makes for not only difficulty in cutting his talons, but also in changing his diapers (especially the big meat-induced poopy ones), buckling him into the stroller or car seat, and/or dressing him.

And also along the lines of undesirable toddler traits, Rex has a few tendencies that make our lives a bit scary at times, and probably very scary in the future as he gets a little older, stronger, more skilled and even more brazen. Rex gets into everything. Rex climbs everything. Rex has no fear and no sense of personal safety. He tries to open doors, drawers, and cabinets. He tries to walk down the stairs by himself (he does NOT have the skill to do this yet). Rex tries to run away in parking lots and streets. He’s kinda violent, and loves to throw everything (Landri’s dolls, his toy cars, food as mentioned earlier – basically anything he can get his hands on). He also hits everything – the floor, the air (especially when mad), the table, the walls, the door, me, his sister…anything in his way.  As you can see, this family has acquired an additional Toddzilla – and that’s Rex, Toddzilla 2.0.

M: What is Rex’s favorite thing to do in the world?
S: Shoot hoops!  Duh!

M: What is Rex’s favorite thing to eat?
S: Landri says, “Tacos!”
M: What do you say? This is the “Scott Says” segment of my blog!
S: Teensy Fruits <a processed, packaged fruit snack>.
M: True.  I think he also likes meat a lot.
S: Yeah.  He liked those ribs at Easter!
M: And his corn dog!  He ate one and a half corn dogs!!!

M: Do you think he will be nice to the new baby?
S: Uh, yes, but I think he’ll be rough with the baby.

PS.  Here’s a video of the kiddos just for fun. 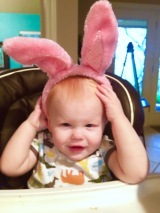 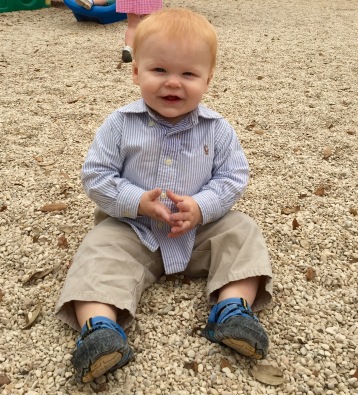