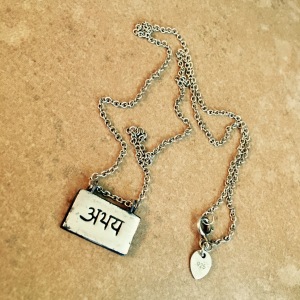 Abhaya. It means fearless in Sanskrit, the language of yoga. And it’s on a necklace that I wear all the time. And as I put it on today, it struck me that this was exactly the attitude that the Steele Knights needed to adopt heading into tonight’s game against top ranked Judson. Abhaya. Fearless. Tonight our boys walked out onto that field fearless.

You guys.  Words cannot describe what just went down at Lehnhoff Stadium tonight!  It was seriously some of the best Texas High School football that I’ve ever seen. It’s an understatement to say that the Steele Knights were on FIRE tonight. In short, we increased our district game winning streak to 36 games and we also are now 7-0 against the Judson Rockets. And #12 Cody Massey played one heck of a game as QB filling in for Xavier Martin! Basically, the Knights played some near perfect football in all aspects of the game and it was a blast to watch! The defense played lights out! The offense got after it! Special Teams were on point! The energy was incredible and from the stands to the field, that stadium was rockin! Scott was incredibly happy after the game too per the photo below! And what a perfect birthday gift for him – as tomorrow Scott turns 36!