Tonight the Knights lost a heartbreaker in double overtime to the Lake Travis Cavaliers, 56-59. This will be a game that will forever stand out in my memory, as it was one of the most (if not the most) intense games I’ve ever attended. In short, it was an evening plagued with drama, starting off with a lightning delay, followed by rain and a two touchdown deficit early on in the game. The Knights fought hard and recovered, tying the score at the half. In the third quarter, we took our first lead of the game and the real battle began. We went back and forth with them over and over and over again, and ultimately they tied the game with a field goal with 2 seconds left on the clock. In the first OT, we both scored a touchdown, and in the second OT, after Lake Travis scored a field goal, it came down to our ball, 4th & 1 on the 2 yard line. Unfortunately we had an incomplete pass and that was the game.

It was a tough one to lose. But on the drive home I was overwhelmed with a feeling of pride and respect. Our Knights played their hearts out. They fought hard. They battled hard. They did not give up and they pressed on over and over and over again. They were committed. They gave 100%. As a parent, this is a quality that I hope and pray that I can instill in my own kids. If the entire world operated with such passion, fire, and drive, how incredible would our world be? And how awesome is it that our team is capable of this kind of fight? No doubt there are many great things in store for the Steele Knights this season. I love our Knights. 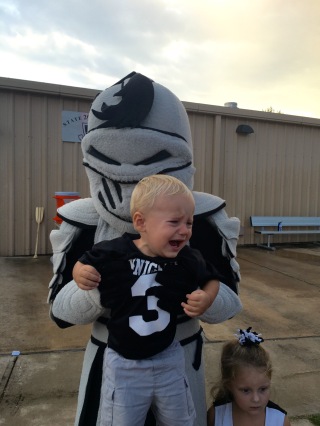 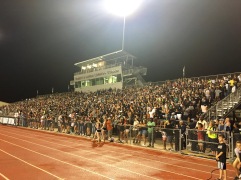 PS. Tricked Ty and let Knitro hold him from behind… once he realized who was holding him he freaked out, LOL (see pics above).