Hi there everyone!  Here’s another guest post from my out-of-town college roommate, Tara, who so eloquently summarizes our big weekend together (football game and half marathon)!

I’m back! It’s hard to believe a year has passed since I last posted, but indeed it has. Time waits for no one. And while many things haven’t changed a bit about the Lehnhoff house (Megan is still superwoman and accomplishes more in a day than I do in a week), there have been some big changes, too! The biggest being that there’s a fifth Lehnhoff on the scene, and he’s a doll. I found myself thinking, “Minus the poop that looks like chili but doesn’t smell nearly as delicious, if kids stayed as sweet and docile as that Baby Ty guy, I might consider a litter of my own.”  Inevitably, though, my daydreams would be shattered by Landri’s high-pitched screams as she hurled herself on the floor, kicking and pounding. Or Rex’s wails as Landri pummeled him.  She’s, um, spirited.

[Footnote:  Really, though, I don’t blame the girl. If anything, as the oldest of four, all born very close together, I empathize with Miss Landri.]

But I’m getting ahead of myself.

The weekend started with my arrival. Megan packed the kids in the car and fought rush hour traffic to pick me up at the airport. The kids were none too pleased about being strapped in their car seats that long and let us know it. For the Whole. Ride. Home. If braving that kind of car ride to pick up an old friend isn’t true friendship, I don’t know what is.

After the longest car ride ever, we turned into the driveway of the Lehnhoff abode. The screaming subsided, and I was enveloped by the Christmas spirit. The most awesome red and green lights were projected on the house!  Landri loved it and was, for the first time in at least an hour, quiet.  It got even better when Megan opened the door to their home.  There, in the entryway, stood the Lehnhoff Christmas tree – a sight to behold. I swear I heard angels singing. Slightly crooked, starless, and skirtless, the tree consisted not of garland and not of ornaments, but of lights.  Just lights, half of which did not work. Hallelujah!

I loved it. Not only is that tree proof that, really, lights are all that matters, but it also embodies this stage in Megan and Scott’s life: when given the choice between a perfect tree and keeping three little humans alive, they choose life!  Well, that, and, let’s be honest, Rex would probably destroy any decorations within arm’s reach.

Although I make fun of it, the undecorated and partially lit tree was the only sign that the adorable little monsters might occasionally be wearing Megan down (well, that and maybe the box of Franzia I spotted in the garage fridge). Megan still managed to throw together beautiful and delicious raw vegan sandwiches made with her homemade, dehydrated onion “bread.”  Seriously. Knowing that if I were in Megan’s shoes, I would have been curled up on the couch with a bottle of wine and Taco Bell, I vowed to change my ways and make meal prep a part of life. There’s no excuse for me.

The next morning, Landri and Ty joined us for the pre-race expo – or “show and tell” as Landri called it. Things went pretty well for the most part – Landri liked me that day, danced with the Geico ghekko, which was adorable, and tasted soda for the first time when our waitress, without asking Megan, brought out a Shirley Temple. Her palate will never be the same.

After lunch and a little more expo time, we made our way to the Alamodome to watch Steele beat Clemens. I was pretty excited to see a real life Texas high school football game. Every time I’ve come to town, I’ve missed Scott’s games, so I was stoked to learn that I’d be able to catch one (and a big one at that!).  I was not disappointed!  From Landri climbing on my head, chasing after Rex, giving piggyback rides, and holding bunless hot dogs in my hands, to actually watching the game, the whole experience was awesome and so different from high school football in Arizona. To top it off, at the end of the game, I felt pretty special walking onto the field with Coach Lehnhoff’s family. Field passes were highly coveted!

After the game, Megan and I ditched the kids and stayed downtown for our race the next day.  Although I struggled  during the second half of the race, it was a blast – the company was good and it is always fun running around San Antonio, through part of Trinity’s campus, and reminiscing about the old days.

But alas all good things must come to an end. After the race and a hearty meal, it was time to return to reality and relieve Scott’s saint of a mother of the kids. Landri welcomed us with an epic tantrum that I swear lasted two hours. While she did that, Megan taught me how to use up old bananas.  We tested our frozen whipped bananas out on Baby Ty. He couldn’t get enough of the taste and, in spite of what we decided were brain freezes, kept coming back for more. His little face was priceless.

And so another weekend of living with the Lehnhoffs comes to a close. Can’t wait until next time! 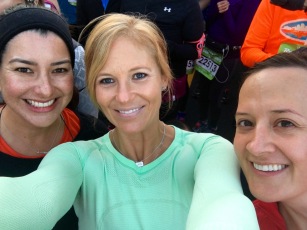 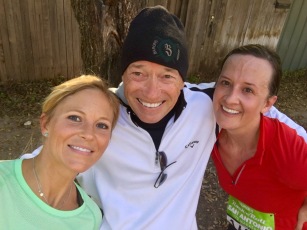