Recently I went to Boerne Lake with a few friends for some sunset/full moon SUP Yoga (Stand Up Paddleboard).  You may recall that I’ve done this before on the Guadalupe/Comal Rivers in New Braunfels (here & here).  It was an awesome experience and was the night of the Blue Moon a few weeks ago.  It was a little overcast, but the moon peeked out from behind the clouds and it was absolutely breathtaking.  I wish I had taken pictures, but I didn’t figure out a way to bring a camera on the water in time.

Anyhow, it was basically my first time out alone without any of my children (including Scott, haha), and a vegan yogi friend of mine brought me one of the most exciting things I could ever imagine!  A new exotic fruit that being from Texas, I had 1) never heard of and 2) never tried!  The thrilling specimen was a Mamey Sapote, and from my research, it seems to typically be grown in Central America, mainly, but the ones here look like they are originating from Florida.  Anyhow, I was so pumped about this acquisition!  Like, seriously enthused!!!  This is a vegan’s dream – trying exciting, new, super special fruits!  My gifted Mamey was very unripe, and from what we had heard, we needed to wait for it to get really soft and squishy before cutting it open to eat.  I checked on it several times daily and I obsessed about it, talking about it constantly at home.  In typical Scott Lehnhoff style, he just always rolled his eyes whenever I mentioned it.  Again, I’d like to reiterate how much I was looking forward to tasting this extraordinary fruit.  I was really excited.  I literally had my Mamey for about two weeks, patiently waiting, when the unthinkable happened.

Yes, you guessed where I’m going with this unfortunate tale.  To this day, I’m not really sure what was going through Scott’s mind when he committed this grave fruit felony, but when I was getting my hair cut, Scott thought it would be a great idea – WITHOUT ASKING ME – to cut my unripe Mamey!  Seriously, WTH?!?  I was so pissed.  Like more pissed than I’ve been in ages!  I have no idea what made him think that trying it when I wasn’t home was a good idea.  I mean even if it was ripe, why would you eat my special fruit when I’m not even there?!?!  And because I am vegan, fruit is extra special to me!  AND he knew how much I was obsessing about my Mamey!!  Ugh.  I was so hot over it. I really couldn’t cool down.  At least not for a while.  The unripe Mamey tasted HORRIBLE and was completely unedible.  And then to make matters worse, this happened.  I had brought my own fixin’s for a Hawaiian Grilled Portobello Burger (including grilled pineapple) to a family BBQ this weekend.  Sure enough, the next day when I went to make myself a burger with my leftovers, I discovered my grilled pineapple to be missing.  Um…that’s the main ingredient on a Hawaiian Grilled Portobello Burger!  The pineapple makes it Hawaiian!  WTH, Scott?!?!  Again?  Is this a new pattern that I need to be concerned about?  Am I married to a closet vegan?  Is the secret out now?  I seriously feel like I’m living in a twilight zone.  He is such an exotic fruit poacher!

But there is a happy ending.  I was shocked to find Mamey’s at our local HEB and this morning, I found a nice soft and squishy one!  It was kismet as I happened to have a meeting this morning with my yogi friend who had gifted the Mamey to me in the first place so I brought my purchase to share.  He too had suffered an unfortunate Mamey incident as someone at his house threw it out because it “looked like it had gone bad.” So we were both extremely happy to try the ripe one together this morning and it did not disappoint!  We decided that it’s a cross between a cantaloupe and a sweet potato as far as taste and consistency go.

It’s funny now – only because I was able to secure additional Mamey’s.  But the moral of the story is as follows: if you do any daily dealings with Scott, you better hold your exotic fruits close!

PS. Thanks for the overwhelming Facebook love on the new hairdo; if you missed it, you can see pics on previous post here. 😉 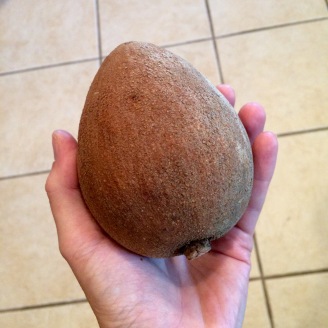 2 thoughts on “Fruit Thief: A True Story About a Closet Vegan”