“Baby Rey” as he calls himself, is now 17 months old! He is growing up very fast and has the moves and words to prove it! I can’t believe he’ll be one and a half in just one more month!  For fun, here’s a look back at Landri at this age!

Rex is finally getting a grasp of English. A little. Besides babbling nonsensical babbles ALL the time, he also has an arsenal of words now: Momma, Daddy, Baby Rey, Smoke (our dog), cracker, please, cheese, shoes, bee-bow (for belly button), thank you, sorry, Landri, baby, bubbles, Ty Ty, milk, baba, me, mine, ball, buffalo, hotdog, chip, bye bye, hi (and a handful of others that I cannot think of right now), and my all-time favorite: “LOVE YOU!” He understands a ton and follows directions very well – WHEN HE WANTS TO (which sadly is only some of the time; see the following paragraph about his “best” skill). Most of the time when he wants something, he starts screaming, “ME!!! ME!!! ME!!!” and I will say, “How do you ask nicely?” and then he says, “Pleeeeeeeeese!!!!” and then after you give him what he wanted, he will say “Dank OOO” for “Thank you!” It’s quite adorable. He usually doesn’t say no, but shakes his head no instead, which is super cute too and not near as annoying as when they start obnoxiously shouting, “No!” I’m sure that’s to come.

Rex is developing a lot of new skills, probably his “best” one being not listening. Here are a couple fun examples that quickly come to mind: he still gets busted on a daily basis for trying to kamikaze off the couch headfirst onto the tile floor; he also popped a piece of crayon in his mouth and swallowed it as quickly as he could when he saw me running towards him screaming, “NOOO!!!”; and most recently, he crawled completely under my car this morning as I chased after him, Ty in my arms.

Oh, and speaking of my car, last weekend I got a new black/black 2015 Suburban. It is way awesome and to quote Scott, “It’s like a freaking spaceship!” Yes, I had a Suburban before this one, but it had bucket seats. If you have three small kids (think car seats), you HAVE to go for the bench (feel free to contact me with more questions if this is your situation). And then since I was getting a new one, I got some additional features to make life easier as a mom of 3 as far as the car goes.  I’m loving it – it’s probably my favorite car ever!

But back to “Baby” Rex. Here are a few (recent) fun facts:

M: What is Rex’s favorite thing to do?
S: I don’t know.
M: That’s not an answer.
S: Right now, he’s kind of into jumping off the ottoman upstairs.  And he likes jumping right now and grabbing zero air.
M: That’s a good one – the jumping. I had forgotten to mention that he attempts to jump all the time and has maybe caught 1 cm of air twice out of 10,000 tries.

M: What is Rex’s worst habit?
S: Throwing everything.
M: That is a good one.  It’s SO annoying.

M: What do you look forward to most with Rex in the coming months?
S: More words.
M: Yeah, in about a month, he’ll have as many as you!
S: HUH!!! 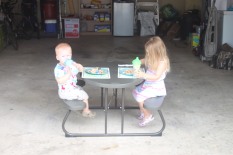 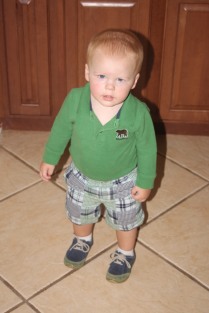 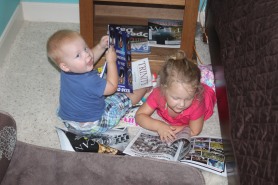