Man, it’s been a long time since I’ve posted – and I’m not really sure why?!  I guess we’ve been staying pretty busy lately.  And then my FaceBook post from a little bit ago inspired me to sneak in a quicky blog post while the kids are still napping (WHAT?!) to tell you guys about one of my new cookbooks that I am really enjoying: http://www.amazon.com/Choosing-Raw-Making-Foods-Part/dp/0738216879. If you’re in a rut in the kitchen, and want something new, this one might be for you!  I like it because being raw there really isn’t much cooking, just mostly chopping and such (seems like dishes are faster and less clean up most of the time).  So far I’ve made a handful of things (most of which received reasonably favorable reviews from Scott AND Landri) including the Avocado Black Bean Breakfast Scramble, Heat-free Lentil and Walnut Tacos (which I know sounds totally sketch but was actually AWESOME and probably our favorite), and a Quinoa Black Bean Salad with Spicy Cilantro Vinaigrette. And so yes, today this happened during naptime also inspired from my new cookbook.  Cheers!  PS. I just found a website associated with the book!!!  Maybe you can check that out before committing to a purchase if you’re curious! http://www.choosingraw.com/ and double bonus, the Lentil Walnut Tacos are featured on her blog here: http://www.choosingraw.com/heat-free-lentil-and-walnut-tacos-plus-choosing-raw-giveaway-winners/ 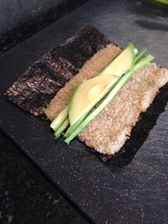 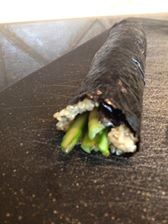 And for the people who only care about the little people (not my weird @$$ cooking, LOL), here’s a pic of my wild bunch during our walk earlier this week!