All’s well here in New Braunfels, Texas where Rex William Lehnhoff has officially joined our little family of three!  Yesterday, at 41 weeks and 5 days, I went to my OB’s office for one final fetal monitor before our scheduled induction (for this morning at 6am).  The results of my stress test were inconclusive, and rather than risk anything due to the over-ripeness of my little babe, my doctor sent me home to get Scott and my bags.  Quick aside: you may or may not know that Scott was diagnosed with the FLU the day before (Wed) which obviously complicated things.  Anyhow, armed with a stockpile of anti-viral masks specifically designed for the flu, we headed to the hospital.  By the time we got settled into the room and started the induction it was 7:45pm.  I had already been having small regular contractions on my own, so once we started the medicine, things got pretty crazy pretty fast.  You may recall with Landri that my labor was 35 or so hours long.  And since I was pregnant with Rex just as long as I was with Landri, I was definitely thinking my labor would also be pretty long.  Nope!  Try 4 hours and 6 minutes!  He was born only 9 minutes shy of 3/14 (Pi Day) which is too bad, but I still call him my Pi Baby because he was born in March (the 3rd month, in ’14)!  Anyhow, he was the same exact length as Landri (21 inches) and only weighed 2 oz less than her (8lb 3oz).  They both have the exact same gestational age in weeks and days, but Rex was born about 6 hours after her.  To me, he looks exactly like Landri but with less (and more blonde) hair.  I do think he has Scott’s forehead and head shape (although thankfully not Scott’s head size, LOL!).  He’s super adorable and smells sooooo good!!!  Baby smell is the best!  He has been an angel and sleeps and eats and doesn’t really cry (yet, haha).  We are all doing well and hope to be home tomorrow!  Here are a few more pictures, and maybe in a few days I can post about Landri’s first introduction to Rex.  It wasn’t as smooth as I had hoped, haha, so stay tuned for that!

Also, if you haven’t already seen them, here are the hospital pictures: http://m.mom365.com/newbornportraits/babydetail.aspx?birthid=acfb112b-f563-4e61-9dfa-191083600a33&utm_source=wnshare&utm_medium=email&utm_content=wnshare_mom_babylink&utm_campaign=wnshare_button 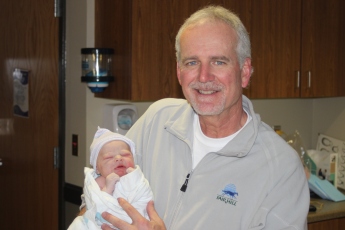 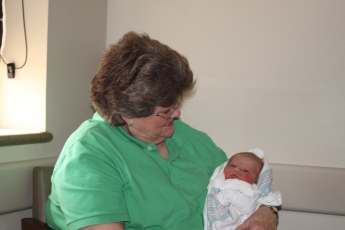 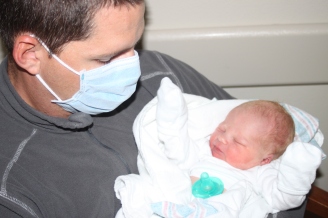 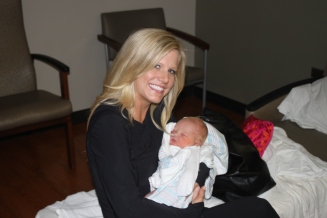