I am relieved to report that Steele made it through another round of playoffs last night, pulling off an impressive win over the undefeated Reagan Rattlers, 40-23. Reagan had even beat Madison, the one team that beat us back in that first game.  It was quite a match-up, starting with Steele scoring TWO touchdowns in the first minute and a half of play – I’m not exaggerating either!!!  It literally was 90 seconds of the game.  The rest of the game wasn’t over that easy, but it was a great start though and a fun game to watch.  I had been more nervous than usual after Smithson Valley (the undefeated team near our house) had surprisingly lost the week before.  Just goes to show that anything can happen. Anyhow, Steele did an awesome job – so proud of all them!  It was an extra tough game with the weather too.  I think it was 34 degrees-ish, and the wind was gusting up to 20 mph and there was even some misty rain mixed in.  I know, all the northerners sit in those crazy outdoor NFL stadiums in snow and such, but this was super cold for us Texans!  It was definitely the coldest game I’ve ever attended.  I wore a tank top, silk long underwear shirt, two long sleeve cold gear running shirts, a fleece vest, a hoodie, and a rain coat.  I also had on an ear warmer, snow hat, the hood from the hoodie and the hood from my rain coat… mittens with hand warmers, leggings, jeans, arctic snow socks, boots, and wrapped myself in a blanket.  And I could still feel the cold!  Obviously Landri and her B-Fri did not make the game – that might have been considered child neglect to bring them along!  Next week I believe that we play Edinburg North at Cabaniss Field in Corpus Christi on Black Friday at 7pm for the third round of playoffs.  Super exciting! 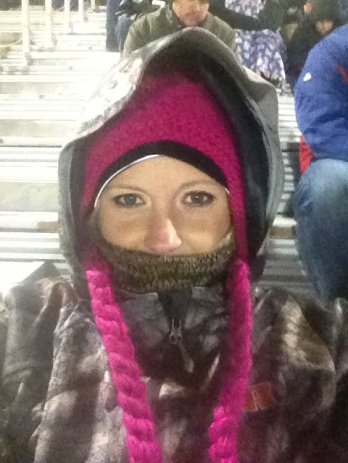 pictured: my only exposed skin 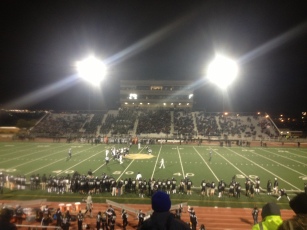 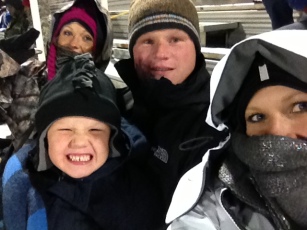 Here’s an article I found: http://www.mysanantonio.com/sports/high_school/high_school_football/article/Stockton-shines-Steele-goes-on-5005191.php