I sure hope I don’t lose any blog followers over this post.  I’m just trying to keep it real though!  I mean after all, this is supposed to be “tales of first-time parenthood,” right?  Again, the title should serve as your official warning.  As mentioned in the past, P does stand for Poop!

So, in the past I’ve called it a “Poop-Acolypse,” which can be defined as a single Poop-a-Riffic event of sorts… a one-time Poop-Splosion… or perhaps just a simple Poop Storm or Poop-Nado… or maybe even a big ole’ dumpy Poop-isode.  But this past week, it seems that we have entered into more of a long lasting Poop PHASE.  Let me just be direct.  Miss Poopy Pants has invited me to a regularly occurring Poop Party in her pants.  “But isn’t that what babies do?!?!” you exclaim.  No, this is different.  This is a VERY cyclical Poop Extravaganza.  A frequently occurring Poop Showdown.  A constantly recurring Poopsonic hell of a Poop Frenzy.  A perpetual Poop-vention.  An unceasing Poop-ference.  A continuous Poop-Union.  Basically just a relentless and endless merry-go-wheel of baby poop.

I’ve done the math.  Our average number of daily baby poops has more than doubled from 3 to at least 7.  And poop ends up everywhere. Inside the crevices of all of her body rolls…in her crib…in her pants…and worst of all… in her little tiny hands!  And the smell has gotten worse and worse.  I can now smell her poops from very far distances such as from across the room at gym daycare… or from the stairwell of our house when she’s tucked all the way inside her room, inside her crib.  Even the dog hides from her smell!  Actually, I’m just kidding.  He and his fleas are still banished to outside, but if he wasn’t, I’m certain that like us, he would want nothing to do with this stink bomb of a baby.  I know, I know, I’m so mean!  But Landri poops bombs. Big, smelly, and powerful bombs.  Of poop.  Bombs which now seem to grace my days over and over and over and over again without any rest.  Is this what happens when you eat “real food????”

When I told Scott I planned to make this post, he angrily said, “No one wants to read that because it’s disgusting!” … but that’s why I gave this post a P rating, LOL! 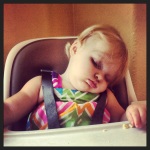 On a less gross note, Landri did the unthinkable the other day.  She fell asleep at her highchair while eating!  Too cute!!!  It kinds of reminds me of this day: