Ty is 5 months old already! It’s insane that we will be posting about being a HALF YEAR OLD next month. Craziness.

Ty got his bottom two middle teeth, literally days after turning 4 months (just like Landri did)! They are really cute looking too. Sometimes when he smiles you can see them peeking out from under his tongue. And speaking of tongue, that kid LOVES his! He plays with it all the time, sticking it out and moving it around. It’s really adorable. And besides discovering his tongue, he’s all about his fingers these days and trying to grip things like toys, paci’s, and his toes, which he is also a big fan of.

Ty continues to grow – he seems very long to me – he is longer than both Landri and Rex at this age, although I think his weight falls in between the two (Rex being slightly heavier than Ty). He’s starting to get rolls on his wrists and legs (they are still small though), and he’s growing longer and longer peach fuzz hair on his round little head! I think his eyes are going to be brown afterall, but I still don’t think they are 100% done settling into their lifelong color. I’m predicting they turn like Scott’s, but are still slightly lighter right now.

Probably the biggest thing happening at the moment is that I’m trying to implement Baby Bottle Bootcamp per our doctor’s permission at the 4 month checkup. We had to halt this exhausting activity though, for about two weeks due to an ear infection (again), but we are trying to get started back up again now. Ty Baby does NOT like it and seems to be a slow learner in this category – or perhaps he’s just a hungry boy. I’m probably just going to move him upstairs to Rex’s old room sometime this week. It’s easier to let him (reasonably) cry it out in the middle of the night when I can turn down the volume on the baby monitor, versus having him screaming 5 feet from my ears (which will also keep Scott from beating me in my sleep for not just giving in and feeding him the unnecessary bottle). I do blame myself for a lot of what’s going on though, because if he’s asleep during the day, I let him be (instead of keeping him up), because it gives me a break and lets me deal with the Toddzillas two on one instead of having a baby in the mix too. But then of course he wants to party at night… such is the life of a third child… no routine of any sort…maybe one of these days I will buckle down and regulate…a mom can dream…

* Ty has the best little giggle in the world. I love it. It’s like music. Not the greatest video, but better than nothing…
* Ty has a precious smile with super cute dimples.
* Ty puts up with his siblings really well, especially Toddzilla 2.0 (Rex) who is a miniature Lennie Small.
* Ty is definitely teething and drools/chews a ton these days.
* Ty rolled over for the first time this past month (tummy to back), although it’s still a rare occasion that he does.
* It hurts if Ty Baby bites you.

M: How is little Ty Baby adjusting to life in the Lehnhoff family?
S: Great.

M: What are some of his best skills?
S: He has no skills.
M: Seriously?
S: He can almost roll over.
M: He did roll over!
S: I haven’t seen it.
M: He also basically holds his bottle too sometimes.

M: What is your favorite thing about Ty Ty?
S: He is a happy baby.

M: That’s what you said about Rex. So our kids are happy kids it sounds?
S: Yeah. Not Landri.
M: Why not Landri?
S: She has issues.
M: What issues?
S: Everything.
M: I think you’re trying to say that she is a 3 year old.

M: What are some of Ty’s favorite things?
S: Bottles.
M: What else?
S: Um…swing?
M: Yes, he likes to nap in his swing. I would also add baths. He loves a hot soak!

M: What are you looking forward to the most with Ty Ty?
S: Playing with Rex. 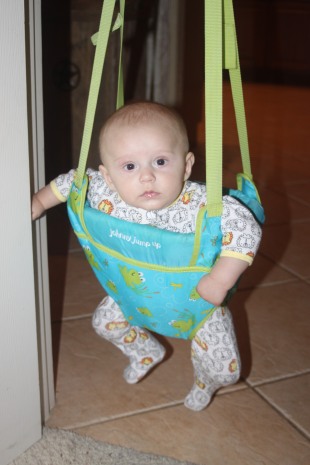 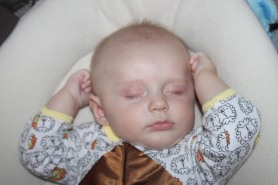