Tonight the Steele Knights not only were crowned District Champions of arguably one of the toughest districts around, but they did so with a perfect record of 10-0! Next week we head into the playoffs against San Antonio’s MacArthur (we played them in the first round last year as well) with a home field advantage at Lehnhoff Stadium. There had been a chance that we were going to play Lee High School – which I was rooting for since that’s where Scott and I met about 12 years ago, and I thought it would have been neat to play them, but it didn’t happen for the Vols this year.

As usual, the Knights played a stunning game of football, the final score being 49-14.  But the Knights’ phenomenal skills on the field were pretty much the only thing normal about this evening.  First, it was cold.  Windy, cold. My weather app had told me no chance of rain (which was accurate) and 65 degrees.  Okay, apparently it was in the 60’s (???) but with the 10 mph winds, it felt way colder.  Mom of the Year, yours truly, didn’t bring jackets for the kids!!!  Wha???  Ty was lucky because he was strapped to me in the carrier with Scott’s big jacket around us both.  But by half time, the big kids were both freezing and I headed out to the car to dip into my emergency mom stash (I knew I had jackets and blankets in there).   Landri’s backup emergency jacket was a size 2T.  “It’s cozy!” she exclaimed as my mom zipped up Landri’s skin tight hoodie (she’s a 3T).  Rex’s coat was equally as bad (size 6-12 MONTH, hahaha!!!).  Then we wrapped them each in blankets and the UNTHINKABLE happened about half way through the 3rd quarter.  Landri started to doze off!!!  And within a minute or two was completely passed out!  It’s been two football seasons since she fell asleep at a game!  And then about 5 minutes after that, Mr. Rex also passed out – a first for this season.  Seriously people.  A twilight zone.  And it was AWESOME.  So easy, peaceful and relaxing.  Two grandmas, two passed out grandkids.  Perfection, just like our season!

Looking forward to the playoffs!! 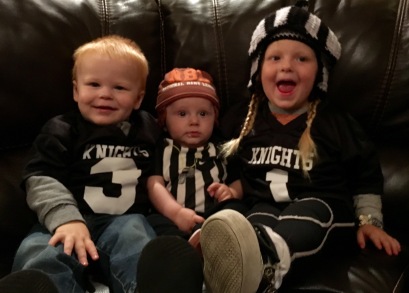 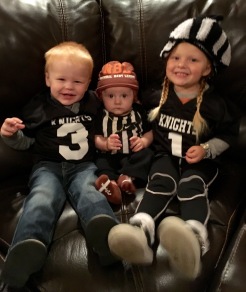 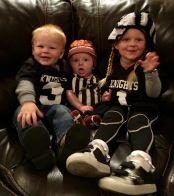 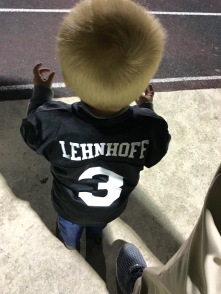 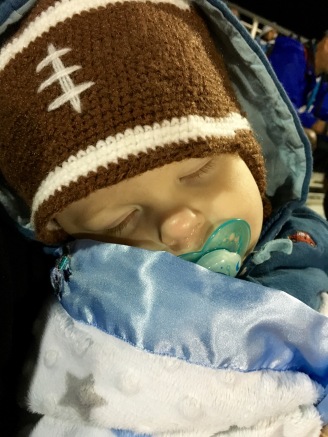