Today Miss Landri turns 15 months old!  And she gets more grown up every day!  In the last month we only had two new firsts besides the dentist (see: https://livinwiththelehnhoffs.com/2013/12/04/landris-worst-nightmare/).  This month she visited her first petting zoo (she loved touching the goats!) and first trip to the children’s museum in New Braunfels (she loved the entire thing!).

Landri is really becoming a little person.  Some of her skills now include: sitting in toddler-sized chairs (she gets really proud of herself when she actually sits down and her bottom doesn’t miss the seat), learning to use her pockets to keep things (you know, like acorns that she finds which are her favorite), dancing, baton twirling (waving, really), giving hugs AND kisses (finally!!! – but only when SHE wants to), blowing kisses (again, when she feels like it), working on tooth brushing (she’s still really ineffective on her own), using her own spork (usually just to throw food though still), stomping (used in her dance routines and just for fun), spinning (one time she spun so much she got dizzy and fell over), making Indian pow-wow sounds with her hand over her mouth, getting her sippy cup in and out of the fridge (if we open the door for her), climbing steps, and being able to straddle bike-like toys made for toddlers (still doesn’t know how to propel herself forward using her feet on the ground).  Additionally, she is still a champion nose-picker.  In fact, one day she picked it so hard it bled!  Probably her biggest developing skill is climbing – which terrifies me.  Yesterday I found her standing on top of her little chair (she doesn’t have the world’s best balance yet so I freaked).  We also caught her climbing on top of her shopping cart and onto the sofa, and she likes to scale her high chair (I’m waiting for her to flip it and come crashing down).  If there was one skill that Landri wished she had but cannot do it, it’s snap her fingers.  That’s a pretty amazing skill in her eyes and she sure tries hard to emulate it.  And while I said she is becoming a little person… the emphasis should be on the word “little.”  Because in many ways she is a lot like a puppy.  Her English, although improving, is very limited, she gets into EVERYTHING, she chews everything (WHEN WILL THIS END????), and she is clearly not housebroken.

Besides practicing her new skills, there are a few things that Landri really loves: her baby doll, her musical seahorse in her crib, flags (you know, outside banks, schools, etc), and animals.  Her dislikes remain the same, mostly being restrained and told no.  Right now, when I tell Landri no, she stops the behavior, sits down, folds in half, chest to the floor and starts crying.  She hasn’t figured out yet that she COULD continue the behavior (making mom really mad).  I see it with the older toddlers we know and I’m terrified for what’s to come as her independence grows.

Landri’s Language!  I mentioned her English is limited, but it’s definitely improving and she understands a lot more than she did this time a month ago.  Some words she knows now are: book, baton, monkey, puppy, bird, bear, brushy-brushy (tooth brushing), brush your hair, upstairs, big step, hold hands, hug, kiss, stomp, spin, point, apple, paci (ADDICTED, by the way), clap, bounce, dance, yay, good girl, baby, hi, bye uh oh, balloon, bubbles, where’s Landri (game like peek-a-boo), come here.  She still doesn’t say as much, but she’s really starting to try and I swear I hear her say things from time to time.  Her number one word however, that she says ALL DAY LONG is “Daddy.”  She points at pictures to Scott all day and says “Daddy.”  She points at trucks and says “Daddy.”  She looks out the front door and says “Daddy.”  She is obsessed with him.  After saying Daddy, she probably says “uh-oh” a lot because she’s always dropping or breaking things, LOL!  It’s pretty cute.  One day I heard her saying “Uh-oh” over and over in the car.  When we got to our destination, she was holding one of her socks and shoes that she had removed, still repeating “uh-oh.”  She also says bubble (in the bath), and “ba-ba” when she wants her sippy cup of milk.  We think she says her own sounding version of “woof-woof” when you ask her what the puppy says.  She’s also started saying “hi” and “bye” but only when she wants to, of course.

Quick Mommy Daycare Alert.  I sadly closed the dishwasher on FOUR of her little fingers last night.  The worst part was that it was such a horrific thing to happen to her that she did the silent cry where they scream so hard that no sound comes out for a few seconds, so I didn’t even realize it immediately until the sound finally did come out (then there was no mistaking, LOL).  She was trying to pull away but her hand was stuck.  It was awful.  She was fine about 10 seconds later so I don’t think her fingers were pinched very hard and they look okay today.  We also had a Mommy & Daddy (together) Daycare Alert though when we both on accident allowed Landri to get knocked down the other day by our neighbors’ two 90 pound Labradors which was actually HILARIOUS to Scott and I (we were both in tears laughing), but of course, Landri, who was at first excited about the dogs, was quickly blind-sided by their size and power and completely hysterical when they swiftly swept her right off her little toddling feet.  We then realized she had fallen and landed on her lip on the tile (it swelled).  Poor little girl.  I swear she gets “injured” somehow every single day of her life as she learns how to be a real toddler.

I’m doing well…  Still getting to yoga usually 3-5 times per week and/or practicing at home… and since the half marathon, I try to run about 3 miles per day (usually at least 5 days a week).  If I don’t, I actually feel yucky so that’s good because it keeps me active.  This weekend I signed up for a 5k so that will be fun!  In general though, I am EXHAUSTED and feel like I need a break.  From everything.  Some mornings (like today for some reason), I wake up and already feel like total crap.  I feel like I’ve been run over by a bus and then dragged behind it for miles.  Everything hurts and I just have zero energy.  And I already am not sleeping well these days which doesn’t help.  I’m lucky if I get 6 hours. That’s a REALLY good night.  I think chasing after Landri all day is super tiring at this point in my pregnancy.  Scott doesn’t understand because 1) he never watches her for more than an hour or so, and 2) he’s not super pregnant, LOL!

However, eventually, I will get a much-needed and much-deserved break.  It will be my FIRST break WITH Scott since Landri’s birth.  That’s right – we have never spent a night TOGETHER without Landri since her birth.  We’ve both been away from Landri overnight, separately and at the same time, we just were not together.  So, we are taking a baby-moon trip to Mendocino, CA for a few days later this month.  Excluding the part where I cannot enjoy wine or cocktails on my vacation, it should be fabulous.  And here’s the best part: I found an amazing and beautiful vegan resort on the Pacific coast that we’ll be staying at.  Scott was of course more than “very upset” when he found out it was vegan.  My response, although perhaps harsh, is that I just don’t care!  As you ladies all know, pregnancy is a huge sacrifice and I think I’ve worked very hard supporting our family this football season, all while growing our newest addition, that for once, I want to do something I want to do!  And honestly, I wouldn’t have planned this trip if I didn’t think he wouldn’t also like it.  I predict this trip will be just like sushi.  When we were dating, he had never tried sushi and of course assumed he HATED it.  I forced him to try it and viola he loved it and has enjoyed eating it for almost the last decade!  Now, I’m definitely not saying that he’s going to come back from California wearing Birkenstocks, hugging every tree in sight, and loving tofu, but I just think that he THINKS he won’t like it, and from everything I have read about this place, the food will be delicious (i.e. can’t tell it is vegan), the views are amazing, and there’s lots of outdoors activities (hiking, biking, kayaking, etc), all things that he will appreciate.  And what I’m most enthused about is that after only eating vegan for all meals for a few days (and doing yoga daily, shhhh, not sure he knows about that yet), I am willing to bet that he comes back feeling (physically) like a new man.  And maybe he will understand some of my life choices a little bit better.  So, I am very hopeful and really do think he will begrudgingly enjoy the trip.  Plus, he’s not pregnant and can enjoy the adult beverages which make everything better, right?!  I will be curious to see how much he admits after the trip – that should be a good blog post!

M: Are you excited about our Baby Moon trip?

M: Why would you say you’re thrilled?

S: Because I can’t wait to go on a vegan yoga retreat. That’s what I’ve always wanted to do. (I’m giggling) Why is that so funny?

M: It’s a resort that happens to serve vegan food and also have yoga classes.

M: What’s the best part about Landri at 15 months?

M: What’s the coolest thing that she says?

M: What’s her most impressive skill?

S: Why would you say that?

M: Because you always avoid giving information in your interviews!  Are you getting nervous about having a second baby?

M: Well because you already know what you’re doing when it comes to babies, don’t you?

M: Well if you don’t know what you’re doing, how did you make it this far with Landri?

S: Thank goodness for you. 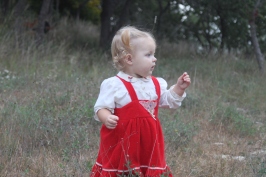 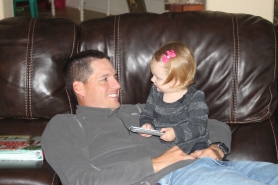 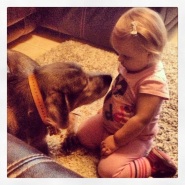