This morning I did my first ever Graffiti Run with two of my friends.  The weather was GORGEOUS; cool, clear, and dry.  I’m not sure what I was expecting as far as the race went, although I was completely paranoid about my super light hair permanently absorbing some unnatural colors (pink, purple, blue, green, yellow, etc).  I tucked my hair up under a bandana with a hat and that worked great!  I sort of felt like a Party Pooper, but folks, I spend WAY too much on my hair to let it get ruined at some 5K, LOL!  I have to say though, it was a really fun time and I’m glad I did it.  Although, I don’t think I will be doing another one.  Just not for me.  I like running (obviously), but am not a fan of getting colors on me, haha!  Basically, there were just participants throwing color around at the starting line and then along the course, there were several what I would call “color bomb stations.”  At these spots, they had race workers lining small sections of the course on both sides, just throwing the colored powder at you as you as you ran through.  I sprinted through those, LOL.  It kind of disturbed me that we were all breathing in this dyed powder, even if it was just corn starch supposedly.  I held my bandana over my nose and mouth through those spots too.  As far as the down-sides go, besides getting colored (which might not be a down-side for you), we were disappointed that the race started more than 20 minutes late, and the course also doubled back on itself.  Like I said, the consensus was that we had fun and were glad we did it, but wouldn’t do it again.  I liked the Jail Break Mud Run a lot more, even though I got a lot dirtier!  A couple pics from today that you can view below… as you can see from the “After” photo, we were probably the “cleanest” people that finished the race!  Party Poopers, I know! 😉  Hey!  It was easy getting in the car afterwards and keeping it clean though!

Oh, and before I forget, HUGE shout-out to my neighbor Chad who watched Landri, along with his two kids while we ran.  Extra shouts due to the fact that Landri blessed him with one of her most stinky gargantuan poo-poos!  Thanks, Chad!  And sorry about the big poop! 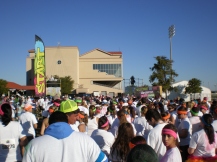 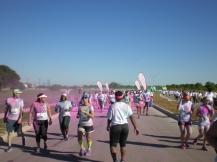