Wow. That’s the kind of race you try to survive. 5 days and I finally feel fully recovered from one of the most difficult, yet incredible runs of my life thus far – one that I am certain will remain in this elite category of races for the rest of my days: The Tejas Trails Bandera Endurance Run 50km. Runners could choose from one of three distances: 25km, 50km, or 100km (approximately 15.5 miles, 31 miles, or 62 miles). It was one giant 31 mile loop for the latter two, and thus we were required to carry anything we might need. I ran it with my friend Melissa who you might remember from the New Orleans Rock N Roll Marathon last year. And a huge shout out to her for completing her first ultramarathon! There is so much to say about our adventure at the Hill Country State Natural Area so I’ll first try to set the scene per the online race information.

On the race website, they bluntly state that in this event, there are “no whiners, wimps, or wusses,” on this course “of rugged and brutal beauty where everything cuts, stings or bites.” The race director goes on to say that this is arguably the toughest 50km course in Texas and that they designed it to be “as difficult as possible, yet still runnable. So this race course isn’t easy, and it wasn’t intended to be.” Just let that sink in for a second and try to imagine what the terrain might look like for 31 miles (or as my GPS clocked me, for 32 miles). Also, regarding the “cutting” mentioned above, the race documents warn runners about the plethora of cactus and Sotol on the mostly single track trail, known for scratching and cutting bare skin that brush against them on these narrow paths.

Luckily for us, the Sotol wasn’t an issue because we were extremely well covered with no exposed skin. This was because at the race start, it was somewhere around 16-19 degrees, with a 10 degree wind-chill. What the hell, Texas?! It never gets that cold here in San Antone. Like, ever. For example, I ran in a tank top before sunrise today and it’s 80+ degrees now, only 5 days later! Let’s talk about the cold for a second… That’s cold. Really cold. So cold in fact, that the water in our hydration vests froze at the start of the race! I wore fleece lined leggings, a tank top, a silk long underwear turtle neck, two layers of Under Armour cold gear long sleeve tops, a synthetic down vest, gloves, ear warmer and a gaiter which I had pulled up to under my eyes. Additionally, I ran the first 10 or so miles with hand warmers inside my gloves! Fortunately it did warm up some later in the day (we were running forever), and it was quite nice running weather (40ish maybe?). We had beautiful clear skies and I put on a visor once the sun was up. Later, I even took off my vest, gloves, gaiter and ear warmer at one point. However, because we were running forever, it eventually dipped back to freezing right around sunset right when we finished the race. It was so cold that throughout the race, we pretended that we were on a Hawaiian adventure at times.  “Do you want to snorkel or dive?” … “Look! The volcano should be on the other side of this peak; we’re almost there.” … “We’re headed to the North Shore now.”  …perhaps this was the delirium that sets in when one has been running forever.

Let’s go back to the terrain. So the race documents weren’t joking or even exaggerating in the slightest when they said it was “brutal.” To me the word “ruthless” quickly comes to mind, along with “merciless” and a whole slew of similarly veined words. The hills were big – I even was tempted to call some of them small mountains, LOL. My Fitbit said we climbed 388 flights of stairs. My neighborhood is hilly and I typically run a lot of hills. But even in a 25 miler here, I will be lucky to hit 150 flights, so 388 was just insane. Not only were there humungous hills, but it was also extraordinarily rocky. You really had to focus on your footwork or else you took a real risk at falling due to a twisted ankle or whatever. Some places had large steps up or down big rocks, and loose rocks were also very common (the steep downhills terrified me). It was jarring to the joints. In fact, that is what was most difficult for me during this race – the knee pain I experienced (which I never have)! It was from all of the repeated climbing/pounding since we were running forever. And even though the terrain of the back half of the race was significantly “easier” than the front half (in my opinion), there were still some monster hills towards the end, including a massive one around mile 29-30. This grand finale somehow did not surprise me and in fact, I’d been calling it the last 10 miles or so.

Speaking of forever, we ran forever. Well, what seemed like forever. We started at 7:38am and finished around dinnertime. I’m not sure what our official time was as we started about 8 minutes late (it’s a stupid story and was my fault), but my GPS clocked us at 9 hours, 38 minutes and 38 seconds. NINE AND A HALF HOURS, PEOPLE! What’s crazy is that this was my second ultramarathon, and I ran my other 50km in just over 6 hours (yes, 3.5 hours FASTER). I’d also note that I’m way more in shape right now (I’ve been back to backing 20/25 mile runs on Sat/Sun, etc because I’m training for a 50 mile race next month). Being constantly moving for 9.5 hr plus can be mentally challenging. When you’re at times averaging less than 4 miles per hour, and you know you have to do 31 miles, it can be disheartening to do the math. So it comes down to my life motto: Slow and steady wins the race. All you gotta do is keep putting one foot in front of the other. That’s it! I know, easier said than done. Several friends have asked if we ran the whole thing. Typically when I do races, I always run the whole thing. But from everything I’ve read and heard about ultra running (especially for novices like us), you always walk up the hills. Always, no matter what. And that’s what we did. There were some spots where we continued to walk a little after making it to the top of the hills, but in general, we tried our best to keep running, you know, because it was taking forever.

So what does it feel like the day after you run 32 miles? In a word, bad. LOL! Seriously though, I was exhausted. Truly just wiped out. Depleted. I was surprised that I was only a little sore. The soreness got a little worse on day 2, but then I was able to turn a corner and have been back to running after taking 2 days off.

So what did I consume during the race to make up for the 4,451 calories that I burned that day (per my Fitbit)? Once defrosted, I drank Tailwind (an endurance sports drink) in my hydration vest twice (total of 4L or approximately 135 oz). I believe the calorie count with that to be at least 1,600. I didn’t seem to sweat too much because of the frigid temperatures so I think that helped. I also ate several Gu’s (100 calories a pop). Additionally, at all but one of the rest stops (they seemed to be about every 5-6 miles?), I splurged on Oreos (they are vegan did you know that?) and Pringles, LOL.

I have tremendous respect for endurance athletes – and especially the elite ones. I’m in utter awe of them. For example, had we wanted, we could have run our 31 mile loop twice for 100km. RIIIIIIIGHT. In fact, for some perspective, I’ll share that the 100km winner, a female, ran twice our distance in a half hour less time. Now that is mind blowing. What’s even more crazy are the course records. These athletes are one of a kind, I swear. I don’t possess their speed, but I’d like to think I’m getting close to their stamina. Shoot, since it takes me twice as long, maybe I actually even have them beat when it comes to that, haha!

Overall, I’ve been feeling pretty strong these last several weeks and am looking forward to my upcoming 50 mile race. This weekend I’ll hit the peak total 2-day mileage in my training (25 miles one day and 25 miles the next). This way my body will have done the total race mileage in two days so hopefully doing it in only one day won’t be too big of a leap next month. After this I have one 30 miler left (backed with 7 the following day) and then it’s downhill from there (15/7 and 10/7 I think). If you’re interested in seeing the plan I’ve been loosely following (mileage more than anything), click here. I am excited and scared but barring injury or sickness, I know I can do it. I know I’ve got this. I am so excited to see what it feels like to cross the 50 mile finish line. I get emotional just visualizing it and can’t wait! Even if it’s only half as cool as finishing this race was, I’ll still be over the moon!

To speak briefly towards staying healthy, I do have a rolling and stretching routine that as I mentioned after the San Antonio marathon that I plan to one day share with you guys via YouTube. I just need to find the time! As far as food goes, I really need to get my post-holiday nutrition back on point! Christmas and New Year’s got me down (or rather up, I should say, haha) but I’m coming back. I’m going to need optimum health for the 50 miler. I’m currently striving towards a high carb, low fat raw vegan diet. It can be very tough and I fail at it more often than not, but to this day, I haven’t found any other way of eating that makes me feel or perform even half as good as it does.

Regardless, while I’ve thoroughly enjoyed learning about and participating in endurance running, I’m not sure that this is something that I see in my future long term. It is extremely hard on the body (at least for me), and I don’t want to accidentally permanently damage this body of mine somehow. I’m a lot tougher than I think I’ve ever given myself credit, and that’s probably the biggest thing I’ve learned during my endurance running adventure. My body is incredible. I don’t mean that in a ‘vanity’ sense (the way that it looks), but rather in a ‘capability’ sense. It has literally run thousands of miles in the form of hundreds of half marathons, 8 marathon length (or longer) runs and counting, including 2 ultramarathons, both of which were in extremely challenging conditions. Hell, in my 30’s alone, my body grew and delivered 3 children in less than a 3 year time span! It’s been through so much. My body is such an amazing machine and has performed far beyond what I ever dreamed! I am so, so very blessed. And even if it craps out on me tomorrow and I can no longer run, while I would be devastated, I can’t be disappointed in it, or myself. PS. KNOCK ON WOOD, LOL!

I’d like to thank Melissa for being an incredible companion on this ultra challenging ultra course. I would never have been brave enough to sign up for this race on my own. Thank you for running alongside me and keeping me going when the miles got long. It was an experience that I’ll cherish for a lifetime. And hey, that Hawaiian sunset is gonna be killer tonight over the ocean! 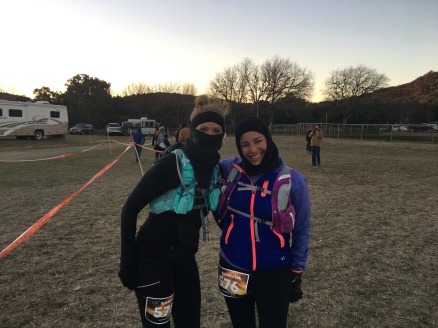 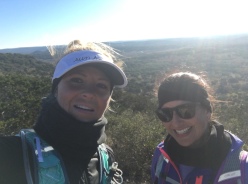 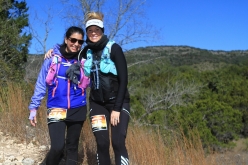 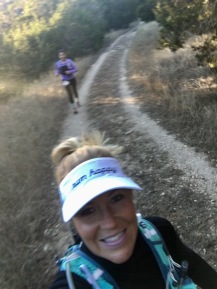 3 thoughts on “My Second Ultramarathon”