Seriously.  Five months.  It’s unbelievable.  And it’s been so crazy busy!  In the last month, I finished up work at NuStar and spent the last two and a half weeks in my new role as a Stay @ Home Mommy!  I am in heaven!  And… I’m not the only one around here with a new job!  A couple of weeks ago Scott was named the interim Head Football Coach and Athletic Coordinator at Steele High School.  And recently it was made official when Scott was approved by the school board and formally offered the job.  You can see an article about it here:

I am so proud of Scott.  He is one of the most dedicated and hardworking people I know and he always puts his whole heart into his job.  He definitely deserves this.  PS. I’m also excited that he will coach games from the field now and not the press box.  Landri will probably like that more too as she gets older and can watch her Daddy during the game!

Before I go any further, I must report that at the tender age of 4 months, 3 weeks, and 4 days, Landri has officially begun to cultivate some pearly whites!  Yes, we discovered that Landri’s first tooth is coming in – bottom front (and another right alongside it)!  To me, this is a really big sign that she is growing up.  While I’m happy that everything is happening as it should, I’m sad at how quickly it’s passing us by. And I’m also just a little bit terrified of what the whole teething experience will bring!  Hopefully the price of her baby grill doesn’t cost too much sleep for Mom and Dad!

1)      She has become a rolling machine.  She rolls back to tummy and vice versa.  However, she can only roll one direction.  We noticed that her right cheek always seemed chapped and we couldn’t figure out why until we noticed she could only roll that direction.  She plants her right cheek down and rolls that way (hence the red carpet/crib “burn”).  So we call her red cheek her “plant cheek” now.  So cute!  I can set her down on the floor and come back a bit later and she’s rolled her way across the room and only stopped because she has rolled up against a piece of furniture.  Thank goodness for those baby speed bumps!

2)      She has found her toes and constantly poses in the yoga pose, Happy Baby <see pics below>.  I have been doing a ton of yoga and it makes my heart smile to see Landri doing her own form of the practice too (I can imagine Scott rolling his eyes here)!

3)      She has fully mastered the Paci-In-Mouth cry.  How she can effectively make noise while a paci is in her mouth is beyond me.  Sometimes she does it so well that I can’t even tell she has her paci.  I start to scramble looking all over the floor for it before realizing that it is in fact stuffed in her little mouth and she’s just multi-tasking.  How impressive!

4)      She visually recognizes her bottle now, reaches for it, grabs it and stuffs it in her mouth on her own <see video>!

5)      She learned to splash in the bath <see video>.  SIDE NOTE: With her rapid roll growth, her double chin has definitely expanded.  Because of this, it’s even more important than ever to “floss her neck.”  For those of you who don’t know, neck flossing is necessary to clean the crusties out of a fat baby’s neck roll/double chin area.

6)      She eats big girl food!  Landri has been on carrots for a week now and she likes them!  She ends up covered in orange head to toe so I just let her eat naked now – so much easier!

In the last month, Landri has had her first snotty nose (boo!), moved upstairs to sleep in her own room and big girl crib (yay!), and finally acknowledged our dog Smoke (she grabbed his nose).  Her hair is still insane, growing ever longer on top and becoming ever balder on the sides and back stripe.

So… back to my new occupation… I have always been a very goal oriented individual and so of course I have some goals for staying home.  Obviously spending time with Landri is first and foremost and I have definitely been accomplishing that on a daily basis. It is so awesome to see her smile and hear her developing giggle all day long.  We spend a lot of time playing with toys, talking, reading books, and looking in the mirror. I narrate what I’m doing all day and wonder what pieces of my one-sided convo she absorbs.  In addition to heaps of time with my baby girl, I also hoped to start up yoga again (it’s been a very long time), continue running, do some cooking, and experiment with my new Vitamix (super high powered awesome blender).

So how I am doing on these endeavors:

I’m happy to report that just in the last two weeks I have been making some major progress on some yoga postures I have always wanted to achieve: side crow, headstand from a tripod (still need to work on the other one), and backbend.  I plan to pick a handful of advanced arm balancing postures to accomplish in 2013.  Any suggestions?  I’m also still running and have completed three half marathons in 2013 so far and have signed up for one more.

On the domestication front…I haven’t gotten too much into the cooking piece yet except to make some homemade granola bars and two different power bars. They came out alright.  When I find some recipes that I really like, I will post them here.  I definitely need to keep practicing though, as I am not a very talented chef and really would like to hone my cooking skills by the time Landri eats real food since apparently I cannot even prepare baby food properly <see previous pea blog post>.  I did however, make these great chicken tenders last night.  Highly recommend them and pretty hard to screw up!  http://www.food.com/recipe/healthy-chicken-tenders-219477.

The Vitamix is without a doubt the best appliance I have ever owned.  It rivals basic inventions such as the dishwasher, washing machine, refrigerator, and toilet.  Scott describes the Vitamix as “liquid awesomeness” and “versatile in its capabilities.”  Now, if you google the Vitamix and see how pricy it is, Scott’s statement should mean A LOT more than just what it sounds like on the surface (since it’s coming from the cheapest man on earth – the man who has been known to recycle <cringe> dental floss).  Anyhow, back to the Vitamix… I have made many morning fruit/veggie shakes, which are awesome, hummus (very good as long as you salt it to taste), and lastly, many different types of sorbet (THE BEST).  I highly recommend that everyone purchase a Vitamix.  And FYI – you can get a factory reconditioned Vitamix from their website for a very nice discount (and still get a 5 year warranty).  Next up on my list is learning soups and sauces! Will keep you posted!

A few other changes around the Lehnhoff abode…I guess this blog is gonna be about full disclosure… so here it goes…Staying at home means one less paycheck which is very scary.  In an attempt to cut financial corners, I’m embarrassed to admit that my wine standards are considerably lower than ever previously (and sadly, this includes my days as a broke college student).  In fact, saying that my wine standards are “considerably lower” is probably an understatement – it’s more like they have plummeted and crashed at rock bottom.  Yes, I slowly worked my way down to boxed wine.  Now I know what you’re probably saying… “There are some good boxed wines out there now,” which there are.  However, those aren’t the ones I’m drinking.  Sadly I have succumbed to purchasing Franzia on a regular basis.  O.M.G. – that is one sentence I never thought I would say.  And in another effort to save money, I recently also fell prey to some counterfeit merchandise.  On my very first Craigslist experience ever (see, there was a reason I always avoided it in the first place), I got suckered into buying a $75 fake piece of crap.  So much for fake Prada handbags and Gucci sunglasses… the counterfeits have now moved into the realm of baby goods.  So let me rewind.  Remember how I had Baby Wrist <see previous post>?  Well, now that Landri is 16+ lbs, wearing her in the Bjorn is exhausting and I’m worried that her growing chunky self is going to give me Baby Back or Baby Neck & Shoulders.  And since my medical insurance isn’t quite what it used to be now that I’m at home, I thought I would invest in the Ergo Baby carrier that allows you to carry your child similar to the Bjorn but provides better back, neck and shoulder support.  The big issue: these things are pricy, costing around $150!  Hence, I found one on Craigslist and it turned out to be a FAKE Ergo Baby (I confirmed this with Ergo Baby).  So now we call it the Fergo Baby instead.  I have no one to blame but myself.  Just really sucks.  And that stupid lady is probably making a fortune off poor stay at home moms trying to save a buck and buy a used baby item.

Just a quick Scott interview about Landri at 5 months…His favorite thing is how much she smiles now (I couldn’t agree more).  He thinks that it’s really surprising how much she hates peas and that he’s really looking forward to the end of the teething stage.  He says that her best skills are her improved hand/eye coordination (spoken by a true coach, right?), her rolling, and eating big girl food.  When asked if having a baby is what he expected, he replied, “Yeah.”  And when asked what he’s learned since becoming a parent, he says, “Patience.”  A man of many words, haha! 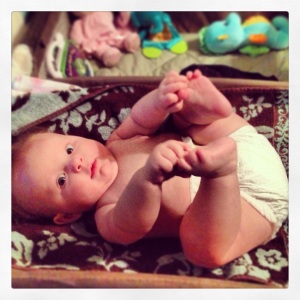 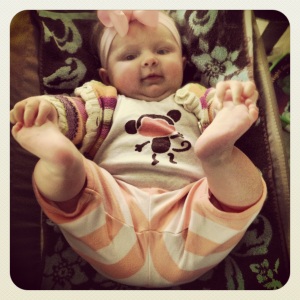 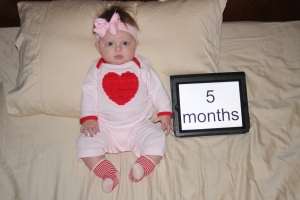